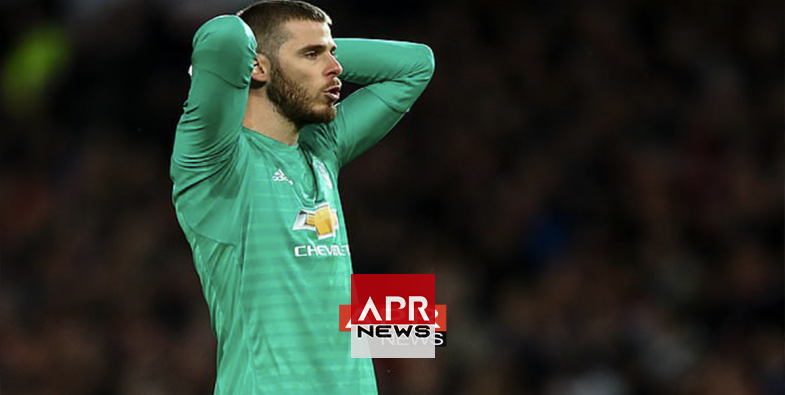 De Gea has been in dismal form and the Spaniard’s troubled season took another turn for the worse at Old Trafford on Sunday.

When Antonio Rudiger tried his luck with a long-range drive, the Chelsea defender’s hopeful effort should have been a routine save for De Gea.

But instead, reflecting his chronic lack of form and confidence, the Spaniard allowed the ball to slip from his grasp into the path of Marcos Alonso, who took full advantage to score Chelsea’s equaliser.

United were unable to recover from that blow as Chelsea held on for a 1-1 draw that kept them three points ahead of their rivals in the race to finish in the Premier League’s top four.

If they do miss out on a Champions League place, many will point the finger at De Gea, who has gone from United’s sturdy last line of defence to one of their weakest links in recent months.

De Gea’s body language, hands on his hips and head down in the waning moments of the Chelsea game made it clear he knew the full extent of the damage done by yet another howler.

Statistics show he has made three errors leading to goals in his past four games, as many as in his previous 123 matches for United.

He has not kept a clean sheet for two months and is the first United goalkeeper to concede 50 goals in a league season for 40 years.

It is a remarkable fall from grace for the 28-year-old, who went to last year’s World Cup widely regarded as one of the best keepers on the planet.

De Gea has been voted United’s player of the year in four of the past five seasons, leading to repeated links with a potential move to Real Madrid.

But the seeds of his downfall were planted in Russia, where a series of substandard displays appeared to take a toll on his morale.

Letting Cristiano Ronaldo’s shot past his body for a late Portugal equaliser opened the floodgates as De Gea conceded six goals in four matches, making just a single save in the whole tournament.

Returning to a United team already in turmoil due to the toxic relationship between Jose Mourinho and his players was hardly the calm environment De Gea needed to restore his equilibrium.

Biggest blunders
When he made 11 saves to frustrate Tottenham in United’s win at Wembley in January, it appeared Ole Gunnar Solskjaer’s arrival to replace Mourinho would be a lift for De Gea.

But every United match is under a microscope and De Gea is developing an unfortunate habit of making his biggest blunders when the stakes are highest.

Lionel Messi benefited when De Gea allowed the Argentine’s weak shot from the edge of the area to squirm under his body as Barcelona knocked out United in the Champions League quarter-final second leg.

Last week, United’s hopes of slowing Manchester City’s title charge were ended when the Spanish stopper tried to save a Leroy Sane shot that was straight at him, but only succeeded in diverting it into the net off his boot.

By the time he fumbled Rudiger’s speculative strike on Sunday, the former Atletico Madrid star was at rock bottom.

He retains the support of United’s players, with Romelu Lukaku saying: “There’s no doubt about his ability. And he’s a leader in the dressing room. Now it’s up to us as a team to help and trust in his abilities.”

“I struggle with it, the idea of players choosing their own coach. I personally think it’s not right. It’s his confidence, nothing to do with the coaching,” Neville said.

His situation has not been helped by the protracted wrangling over his contract.

De Gea’s present deal expires in 2020 after United triggered the option of an additional year.

But negotiations over an extension have stalled, leading to fresh reports of a possible close-season move to Real or Paris Saint-Germain.

De Gea was reportedly close to tears after his mistake against City, showing his woes are not due to a lack of passion for the United cause.

Yet, with United’s problems mounting, De Gea’s confidence crisis is one more issue Solskjaer could do without.