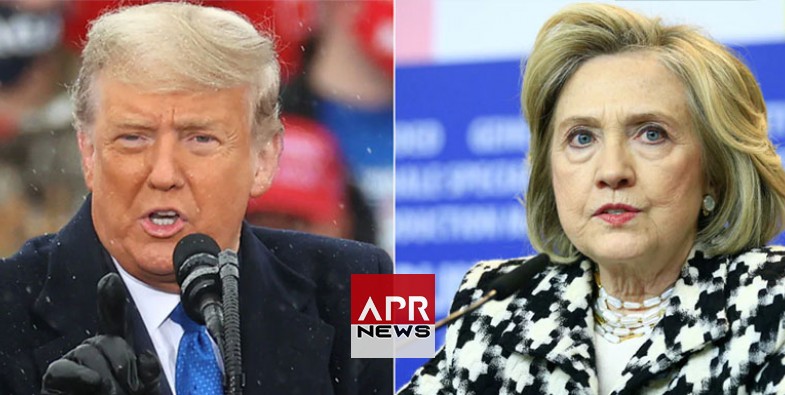 Hillary Clinton, the former secretary of state, spoke with House Speaker Nancy Pelosi on her podcast about the riot at the U.S. Capitol earlier this month and hinted that Russian President Vladimir Putin may have been receiving updates about the chaos from President Trump.

Clinton, who hosts the podcast, "You and Me Both," told Pelosi that she would be interested in obtaining President Trump's phone records to see if he was on the phone with Putin while the Capitol was being breached.

Clinton lost to Trump in 2016 and said it is clear that Trump has a disdain for democracy, but its true depths may never be known. She said the president had "other agendas" while in the White House and hopes that one day it becomes known who exactly the president was "beholden to" and "who pulls his strings."

"I would love to see his phone records to see if he was talking to Putin the day the insurgents invaded our Capitol," she said. She asked Pelosi if she believed the country would benefit from a 9/11-commission-type probe to investigate what exactly led up to the deadly riot.

Pelosi said she is in favor of such a commission and she recalled telling the president that, "With you, Mr. President, all roads lead to Putin."

"I don’t know what Putin has on him politically, financially or personally, but what happened last week was a gift to Putin because Putin wants to undermine democracy in our country and throughout the world," Pelosi said. She said those that took part in the riot were "Putin’s puppets."

"So yes, we should have a 9/11 commission and there is strong support in the Congress to do that," she said.

Representatives from Pelosi and Clinton did not immediately respond to an after-hours email from Fox News.

The suggestion from a former top diplomat that a sitting president could have somehow interacted with a foreign leader during such a trying time in the country's history is remarkable and perhaps is an example of how divided the parties are in Washington. Trump supporters often tie President-elect Joe Biden to China.

Byron York, the Fox News contributor, retweeted a clip of the podcast and wrote, "There was a House investigation. A Senate investigation. A special prosecutor investigation with the full powers of law enforcement. Obsessive media inquiries. None found what Hillary Clinton wanted to find. So she wants another..."

Clinton called the breach an "invasion" while Congress was "doing the work of Democracy" and certifying an election. Earlier this month, she offered her support for impeaching Trump a second time, but claimed that the root problem that led to the riot at the Capitol last week – white supremacy – will still remain.

She wrote in a Washington Post op-ed that the violent protest "was the tragically predictable result of white-supremacist grievances" that she said were fed by Trump's rhetoric.

"Removing Trump from office is essential, and I believe he should be impeached," Clinton wrote. "Members of Congress who joined him in subverting our democracy should resign, and those who conspired with the domestic terrorists should be expelled immediately. But that alone won’t remove white supremacy and extremism from America."