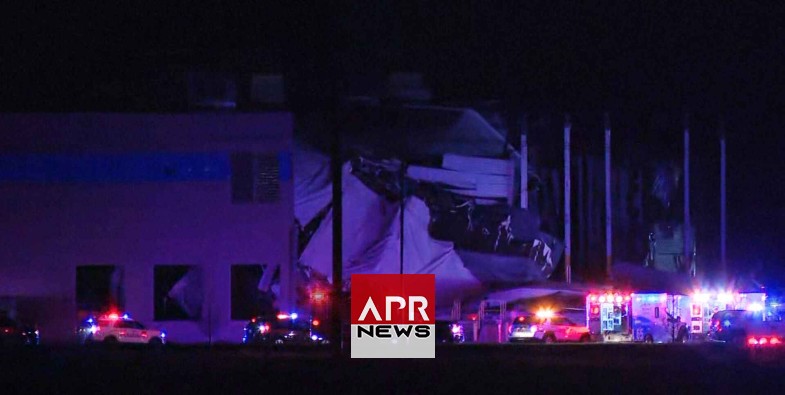 An Amazon distribution center is partially collapsed after being hit by a tornado on Dec. 10, 2021 in Edwardsville, Ill.
Email Facebook Twitter LinkedIn
Saturday, 11 December 2021

One person was reported dead in Arkansas after a possible tornado struck a nursing home, and tornado-like damage was reported outside St. Louis on Friday.

At least one death and multiple injuries were confirmed following widespread reports of tornadoes and severe weather Friday night across parts of the U.S.

The storms were reported to have caused the partial collapse of a roof at an Amazon facility in Illinois, the destruction of an Arkansas nursing home, and numerous collapses and reports of damage.

In Edwardsville, Illinois, outside St. Louis, there were multiple injuries after a 100 foot portion of a wall partially collapsed at an Amazon facility, officials with the Illinois Emergency Management Agency and Edwardsville Fire Department said.

The fire department said no deaths had been confirmed.

An Amazon distribution center is partially collapsed after being hit by a tornado on Dec. 10, 2021 in Edwardsville, Ill.Robert Cohen / St. Louis Post-Dispatch via AP

Herb Simmons, the director of the St. Clair County Emergency Management Agency who spoke to NBC News from the scene, said that his agency received a call for mutual aid at 8:59 p.m.

“We are in rescue mode at this time,” he said.

Simmons said the site of the partial collapse is on the Amazon complex, but did not know which building it was, nor how many people were believed to be trapped inside.

He added that it was going to be a “long process” to determine exactly what had happened.

Multiple Amazon employees have posted on social media that they understand that the company building that was hit is known as DLI4, a delivery station.

This type of facility, according to Amazon’s own website, is where “orders are prepared for last-mile delivery to customers.”

DLI4 is immediately next door to STL4, a much larger Amazon “fulfillment center.”

"The safety and well-being of our employees and partners is our top priority right now," he said.

Illinois Gov. J.B. Pritzker activated the state’s Emergency Operations Center as a result of the severe weather. There have been multiple, unconfirmed reports of tornadoes, the emergency management agency said.

'Loss of life is expected'

Kentucky State Police tweeted early Saturday that its post in Mayfield was responding to “a severe tornado event that spreads across multiple counties.”

“While no fatalities have been confirmed at this time, loss of life is expected,” the department said.

A possible tornado also struck in Samburg, Tennessee, where the local fire department was severely damaged, the Obion County Sheriff's Office said. It wasn't clear if there were injuries.

The National Weather Service also issued a tornado emergency for the Kentucky cities of Madisonville, Earlington and Nortonville. Such a designation signifies that "severe threat to human life is imminent," catastrophic damage is likely, or that there's reliable information that a tornado touched down.

In Missouri, two people were hospitalized, including one with “very critical injuries,” and a third person was injured following structural collapses, said Kyle Gaines with the St. Charles County Ambulance District.

The National Weather Service warned Friday night that “tornadic thunderstorms” were moving from eastern Missouri to Illinois Friday night as part of a line of unstable weather moving east.

The instability was created when warm, humid air from the Gulf of Mexico interacted with a cold front, federal forecasters said.

The extreme weather, including heavy downpours and some flooding, was expected from the Mississippi Valley, which includes many states along the Mississippi River, to the Ohio Valley.

Confirmation that a tornado has touched down takes time and often comes a day or more after the weather event because the National Weather Service uses in-person assessments after the worst weather has passed. The service examines how trees were uprooted or damaged as part of the process.

Strong weather was expected to affect 35 million Americans this weekend, with heavy snow forecast in the Midwest, tornadoes possible in the South, and rain aiming for California.

A low-pressure system over the Central Plains was producing as much as 2 inches of snow an hour in the Minneapolis-St. Paul region Friday night. "Travel will be very difficult," the weather service tweeted.

That front was expected to strengthen as it moves over the Great Lakes region Saturday and brings with it heavy snowfall and blustery winds, federal forecasters said.

Light snow and strong winds were expected overnight in Chicago, they said. Rain and high winds were forecasted for Detroit, where the National Weather Service warned residents to prepare for possible power outages.

Warm air was expected to move into the Eastern Seaboard on Saturday, producing record high temperatures for the date in some parts of the Mid-Atlantic, federal forecasters said.

But the springlike weather will be short-lived: A cold front was forecasted to "sweep across the entire East Coast" late Saturday, bringing "sharply falling temperatures and sudden onset of blustery winds," the weather service said in a forecast discussion Friday.

California was preparing for rain and snow as a storm was expected to strike the northern half of the state Saturday and then move south, bringing snow to the Sierra Nevada mountains and even to peaks in Southern California. Rain was forecast from the Bay Area to the border.

Federal forecasters in Oxnard, California, said as much as 2 feet of snow could fall Monday and Tuesday in mountain locations higher than 7,000 feet.

The National Weather Service office that covers Sacramento urged motorists to avoid traveling in the mountains.

The California governor's Office of Emergency Services said residents up and down the state should prepare for "widespread moderate to heavy rain, mountain snow, gusty winds, and thunderstorms" through at least Tuesday.