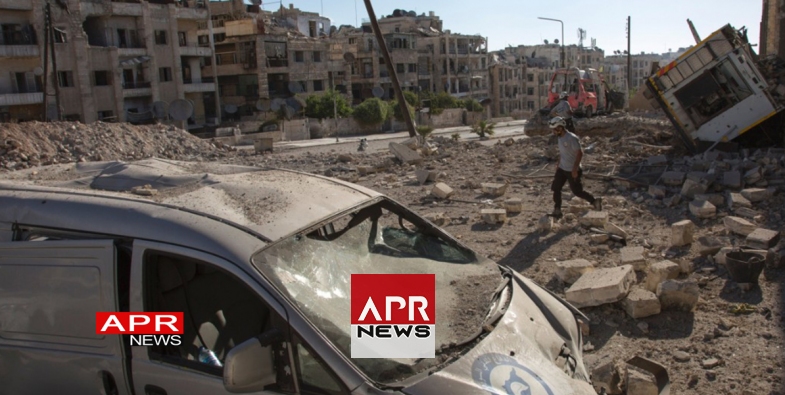 AFP - Turkey on Wednesday warned Iran and Russia to hold back the Syrian regime in bombing the rebel-held northern Idlib province, as tensions mounted ahead of mooted peace talks later this month.

Ankara has been working closely with Russia and Iran to end the Syrian conflict over the last months but has stepped up pressure on Moscow and Tehran as the bombardments on Idlib intensified.

Russia wants to bring all the parties in the Syrian conflict together for a conference in its Black Sea resort of Sochi at the end of this month but the tensions with Ankara are proving a major obstacle.

Observers have also warned of a major humanitarian catastrophe in case of more intense intervention in Idlib, especially for tens of thousands of internally displaced people there.

"Iran and Russia should fulfil their responsibility. If you are guarantors -- and you are -- they should stop the regime," Foreign Minister Mevlut Cavusoglu told the official Anadolu news agency.

Cavusoglu said Turkey was acting as garantor for the actions of the opposition and it was up to Russia and Iran to do the same for the government.

Ankara has supported the anti-Assad opposition throughout the almost seven-year Syrian civil war while Russia and Iran have backed Assad.

However, despite the differences, Turkey had teamed up with the two other powers in a bid to bring a lasting peace to Syria, even though analysts have long warned the three-way alliance is highly brittle.

In the biggest public flare-up of tensions with Moscow and Tehran in months, Ankara has already summoned the Russian and Iranian ambassadors over the Idlib bombing.

Cavusoglu said 95 percent of the violations in Idlib were carried out by the regime and the groups backing the regime.

Idlib province is almost entirely controlled by anti-government forces that are dominated by a jihadist outfit known as Hayat Tahrir al-Sham (HTS) consisting mostly of former fighters from the Al-Nusra Front, an Al Qaeda affiliate.

Assad's forces have upped efforts in the last days to impose control over Idlib and the Eastern Ghouta enclave near Damascus, the two last rebel bastions in Syria.

Russia is hoping to hold a Syria peace congress in Sochi on January 29-30 with the particular aim of setting up a new constitution for post-war Syria.

But Turkey says it will boycott any talks involving the Syrian Kurdish militia of the Democratic Union Party (PYD), which Ankara views as a terror group but controls much of northeast Syria.

A previous attempt in November to convene talks in Sochi failed due to disagreements between the prospective participants, in particular Turkey.

"We have said we will not be in any environment... where the YPG is present," said Cavusoglu. A Turkish foreign ministry official told AFP that Ankara's attendance at the talks had not been decided.

Kremlin spokesman Dmitry Peskov said Wednesday "intense contacts" were in progress at expert level between Russia, Iran and Turkey in order to draw up the list of participants.

"Sochi has failed to land twice and there is still not a lot of clarity about who will go," said one European diplomat, asking not to be named.

"We are sceptical. There is a risk it will involve the wrong people at the wrong time," the diplomat added.

Russia is also angered by attacks on Russian bases in Syria last week by drones which it says were sent from Idlib province.

The Russian defence ministry has written to Turkish army chief Hulusi Akar and intelligence supremo Hakan Fidan to insist that the terms of a ceasefire are upheld, the defence ministry newspaper Krasnaya Zvezda said.

A likely future sticking point between Russia and Turkey is also the fate of Assad, who Ankara has vehemently opposed throughout the conflict and President Recep Tayyip Erdogan last month described as a "terrorist".

According to European officials, some 1.4 million people are in need of humanitarian assistance in Idlib while over 70,000 fled into the area in the last months following fighting elsewhere in Syria.