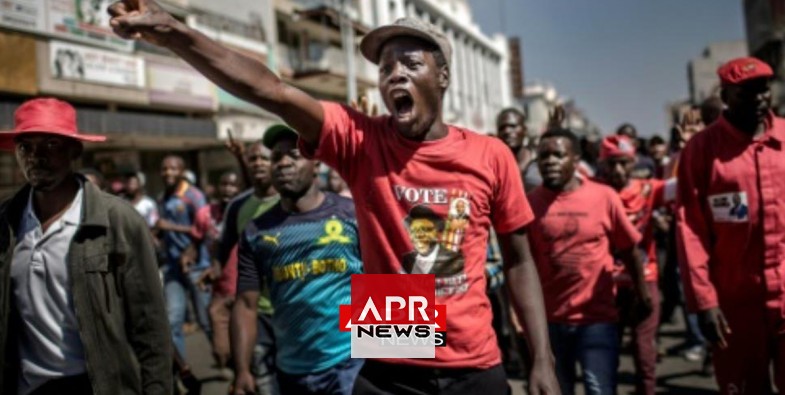 APRNEWS - Protests in Zimbabwe’s historic elections turned bloody on Wednesday as a man was shot dead during demonstrations over alleged vote fraud and President Emmerson Mnangagwa appealed for calm.

The polls — the first since autocratic president Robert Mugabe was forced out by a brief military takeover in November — had offered Zimbabwe the chance of turning the page on a brutal chapter of its past.

But the mood quickly descended into anger and chaos as supporters of the Movement for Democratic Change (MDC) opposition declared they had been cheated.

“You said you were better than Mugabe — you are the picture of Mugabe,” shouted one young male protester wearing a white T-shirt. “We need security for the people.”

Official results showed that the ruling ZANU-PF party had easily won the most seats in the parliamentary ballot — strengthening Mnangagwa’s prospects of holding onto power in the key presidential vote.

MDC supporters burnt tyres and pulled down street signs as protests spread from the party headquarters in Harare.

“Now is the time for responsibility and above all, peace,” wrote Mnangagwa on his verified Twitter account.

“At this crucial time, I call on everyone to desist from provocative declarations and statements.”

It called for transparency in the release of results.

EU chief observer Elmar Brok said there were “efforts to undermine the free expression of the will of the electors through inducements, soft intimidation, pressure and coercion… to try to ensure a vote in favour of the ruling party.”

“On many occasions, preparation, financing, media and hopefully not in the counting — it was advantageous for the ruling party,” he told AFP.

Mnangagwa, 75, had promised a free and fair vote after the military ushered him to power in November when Mugabe was forced to resign.

Under Mugabe’s 37-year reign, elections were often marred by fraud and deadly violence, with the EU observers banned since 2002.

The Zimbabwe Electoral Commission (ZEC) said Wednesday that of 210 parliamentary seats, 153 had been counted with ZANU-PF winning 110 and the MDC Alliance 41.

“The results are biased, trying to give the impression that ZANU has won,” said Lawrence Maguranyi, 21, an MDC supporter and university student protesting at the party headquarters.

“ZEC seeks to… reverse the people’s presidential election victory. The strategy is meant to prepare Zim mentally to accept fake presidential results,” he tweeted. “We won the popular vote and will defend it!”

Delayed results?
The regional SADC bloc, in its preliminary report, said Wednesday that the campaign and election had “proceeded in a peaceful and orderly manner and were largely in line” in Zimbabwean law.

It called for any aggrieved candidates to “refrain from any form of violence”.

If no presidential candidate wins at least 50 percent of the ballots cast in the first round, a run-off vote is scheduled for September 8.

The electoral commission warned that final results of the presidential first round may not be known until Friday or even Saturday.

Mugabe, 94, voted in Harare alongside his wife Grace after he stunned observers by calling for voters to reject ZANU-PF, his former party.

His attempts to position Grace as his successor are widely thought to have driven the military to intervene and put their favoured candidate, Mnangagwa, in power.

But Chamisa, a lawyer and pastor who performed strongly on the campaign trail, sought to tap into the youth and urban vote.

He has repeatedly accused ZANU-PF and election authorities of trying to use a flawed electoral register and fixed ballot papers to steal the election.

Mnangagwa was allegedly involved in violence and intimidation during the 2008 elections when then opposition leader Morgan Tsvangirai pulled out of the run-off after attacks claimed the lives of at least 200 of his supporters.