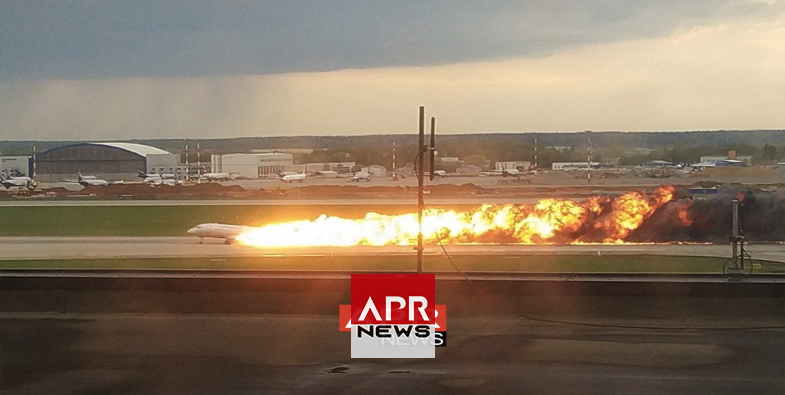 “For the moment, we confirm the death of 13 people, two of them children,’ said a spokeswoman for the crash investigation team, Svetlana Petrenko, the agency reported.

Dramatic footage shared on social media showed the Aeroflot-owned aircraft engulfed in flames as it landed on the tarmac at Sheremetyevo, Moscow’s busiest airport.

In the videos, passengers could be seen leaping onto an inflatable slide at the front and running from the blazing plane as huge black columns of smoke billowed into the sky.

Data from tracking website Flightradar24 indicates the emergency happened around 30 minutes after take-off.

“It attempted an emergency landing but did not succeed the first time, and on the second time the landing gear hit (the ground), then the nose did, and it caught fire,” a source told Interfax news agency.

According to the Ria Novosti news agency, the plane had been headed to the far northwest city of Murmansk in Russia. It said initial findings suggested an electrical fault might have caused the blaze.

In a statement, Aeroflot said the motors were likely to have caught fire mid-air.

Investigators have opened a criminal probe into a possible breach of security rules.

Several flights have been diverted to other Moscow airports or Nizhny Novgorod, some 500 kilometres (310 miles) east of the Russian capital.