Iran will not give in to pressure from Trump, says Rouhani 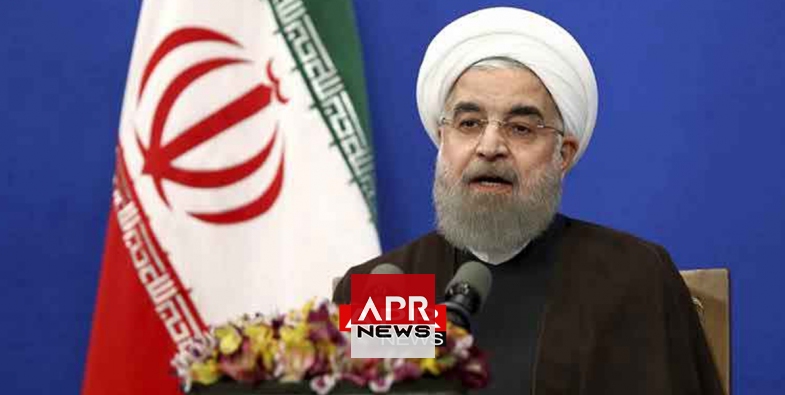 Iran will not give in to pressure from Trump, says Rouhani

APRNEWS - Iranian President Hassan Rouhani lambasted on Tuesday President Donald Trump’s withdrawal from a deal with Iran on its nuclear programme, and said Iranians will not give in to U.S. pressure but would defend their independence and Islamic values.

Rouhani, in a speech broadcast live on state television, said Trump’s action on the international deal was “appalling and illegal” and had hurt America’s global reputation.

He promised Iranians the government would be able to handle the economic pressure of new U.S. sanctions, a day after traders massed outside parliament, protesting against a sharp fall in the value of the national currency.

Washington is to start reimposing economic penalties on Tehran in coming months after U.S. President Donald Trump quit an agreement between major world powers and Iran in which sanctions were lifted in return for curbs on its nuclear program.
This may cut Iran’s hard currency earnings from oil exports, and the prospect is triggering a panicked flight of Iranians’ savings from the rial into dollars.

On Monday, police patrolled Tehran’s Grand Bazaar as security forces struggled to restore normality after clashes with protesters angered by the rial’s collapse, which is disrupting business by driving up the cost of imports.

Defending his economic record, Rouhani said the government’s income had not been affected in recent months, and the fall in the rial was the result of “foreign media propaganda”.

“Even in the worst case, I promise that the basic needs of Iranians will be provided. We have enough sugar, wheat, and cooking oil. We have enough foreign currency to inject into the market,” Rouhani said in a speech broadcast live on state television.

Rouhani said the fresh U.S. sanctions were part of a “psychological, economic and political war”, adding that Washington would pay a high price for its actions.

“Withdrawal was the worst decision he (Trump) could make. It was appalling. It hurt America’s global reputation,” he said.

Trump on May 8, withdrew from the Iran nuclear deal, unraveling the signature foreign
policy achievement of his predecessor Barack Obama, isolating the U. S. from its Western
allies and sowing uncertainty before a risky nuclear negotiation with North Korea.

The decision, while long anticipated and widely telegraphed, leaves the 2015 agreement reached by seven countries after more than two years of grueling negotiations in tatters.

The U.S. reimposed the stringent sanctions it imposed on Iran before the deal and is considering new penalties.

Iran said it will remain in the deal, which tightly restricted its nuclear ambitions for a decade or more in return for ending the sanctions that had crippled its economy.

So did France, Germany and Britain, raising the prospect of a trans-Atlantic clash as European companies face the return of American sanctions for doing business with Iran.

China and Russia, also signatories to the deal, are likely to join Iran in accusing the U.S. of violating the accord.

Trump’s move could embolden hard-line forces in Iran, raising the threat of Iranian retaliation against Israel or the United States, fueling an arms race in the Middle East and fanning sectarian conflicts from Syria to Yemen.

The president, however, framed his decision as the fulfillment of a bedrock campaign promise and as the act of a dealmaker dissolving a fatally flawed agreement.

He predicted his tough line with Iran would strengthen his hand as he prepared to meet North Korea’s leader, Kim Jong-un, to begin negotiating the surrender of his nuclear arsenal.

Trump’s announcement drew a chorus of opposition from European leaders, several of whom lobbied him feverishly not to pull out of the agreement and searched for fixes to it that would satisfy him.

It also drew a rare public rebuke by Obama, who said Trump’s withdrawal would leave the world less safe, confronting it with “a losing choice between a nuclear-armed Iran or another war in the Middle.