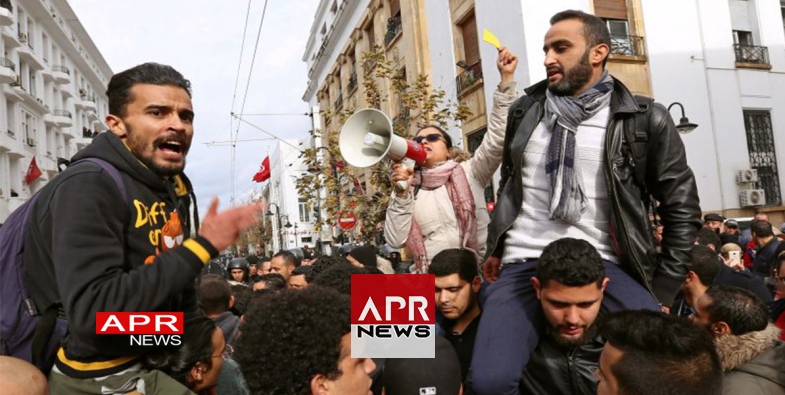 AFP - Seven years since the Tunisian revolution that ignited the Arab Spring uprisings, 38-year-old Walid has no job and says people are even more hungry than they were under dictatorship.

Anger over poverty and unemployment erupted into protests and clashes this week that have led to hundreds of arrests ahead of Sunday's anniversary of the overthrow of dictator Zine El Abidine Ben Ali.

"It's been seven years and we've seen nothing happen. We've had freedom, it's true, but we're more hungry than before," Walid said in Tebourba near the capital Tunis.

Desperation over police harassment and unemployment drove a Tunisian street vendor to set himself on fire on December 17, 2010 in a town in the country's neglected interior.

Mohamed Bouazizi, a 26-year-old university graduate who eked out a living selling fruit, died weeks later, fuelling social unrest that spread across much of the Arab world.

Following a wave of protests, Ben Ali resigned on January 14, 2011 after 23 years in power.

He fled to Saudi Arabia, becoming the first leader to stand down in the Arab Spring.

Compared to other countries rocked by uprisings such as Libya and Yemen which are still deep in turmoil, Tunisia has been praised for its steps towards democracy.

A new constitution was adopted and legislative and presidential polls held in 2014.

The country has "the same economic model, with the same problems" as before, the president of the Tunisian Forum for Economic and Social Rights, Messaoud Romdhani, told AFP.

"So the situation keeps getting worse."

In a report released last month, the group warned that despite democratic advances, "unemployment, misery and social and regional inequalities have worsened".

Tunisia has been convulsed by sometimes-violent demonstrations since Monday in which youths throwing stones and Molotov cocktails have clashed with security forces who responded with tear gas.

Dozens of people have been injured and more than 800 arrested on charges including theft, looting and arson.

One protester died on Monday night in Tebourba though police have insisted they did not kill him.

In the latest protest, hundreds of Tunisians took to the streets of Tunis and the coastal city of Sfax on Friday, waving yellow cards and demanding that the government reverse austerity measures.

The demonstrations "reveal an anger carried by the same people who mobilised in 2011 and obtained nothing in terms of economic and social rights," said political scientist Olfa Lamloum.

The trigger of the new protests was a finance law imposing tax hikes after a year of rising prices.

The Tunisian economy has never recovered from the instability that followed the revolution.

The key tourism sector was dealt another crushing blow by jihadist attacks that shook the country in 2015 including the beachside massacre of 38 foreign holidaymakers.

The government was forced to turn to the International Monetary Fund which lent Tunisia $2.9 billion in 2016 on condition that it reduced its budget and trade deficits.

Youth unemployment remains above 35 percent according to the International Labour Organization.

Every year since 2011, 10,000 children have dropped out of primary school and 100,000 young people have left college or high school without diplomas, says the Tunisian Forum for Economic and Social Rights.

In a sign of growing disenchantment, illegal emigration reached the highest level since 2011 in the autumn.

Municipal polls seen as the final stage in Tunisia's transition to democracy have been delayed until May, while fresh legislative and presidential elections are planned for 2019.

But the democratic steps have not extinguished the revolutionary fervour altogether.

"The potential for resistance is still there," Lamloum said. "Young people still have the same dream for Tunisia even if it will take time."