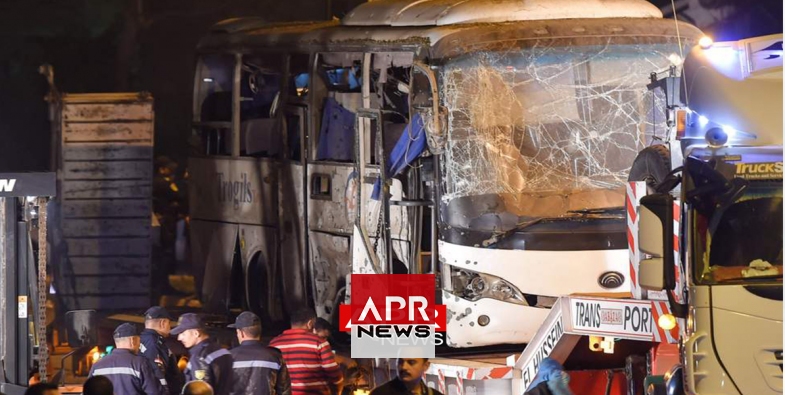 A rudimentary device containing nails and pieces of metal detonated on the perimeter of the Grand Egyptian Museum near a bus carrying 25 South African tourists from the airport to the pyramids district.

The Interior Ministry did not say whether the suspected militants were connected to Sunday’s attack, but said its forces killed the suspects during raids on their hideouts in the 6th of October and Al Shorouk districts, where it said members of the militant group Hasm were planning a series of attacks in the country to create an “atmosphere of chaos.”

Egypt accuses the group, which emerged in 2016 and has claimed several attacks, of being a wing of the outlawed Muslim Brotherhood. Egypt’s oldest Islamist movement denies this and says it seeks change through peaceful means only.

The ministry said the suspects were killed in gunbattles, but did not elaborate on the suspects’ identity or whether there had been any casualties or injuries among the security forces.

Weapons and explosives were found at the scene of the shootouts, the ministry said.

Explosion targets tourist bus
At least 17 people have been killed in an explosion targeted at a tourist bus in Egypt on Sunday. The incident occured near the Grand Egyptian Museum, next to the pyramids of Giza.

South African and Egyptian tourist were among the injured in the attack, according to security and medical sources.The attack comes just over a month before the start of the African Cup of Nations in Egypt from 21 June to 20 July.

The tourism industry, crucial to the Egyptian economy, has been severely affected by political instability and attacks following the 2011 revolt that led to the fall of President Hosni Mubarak after 30 years in power.