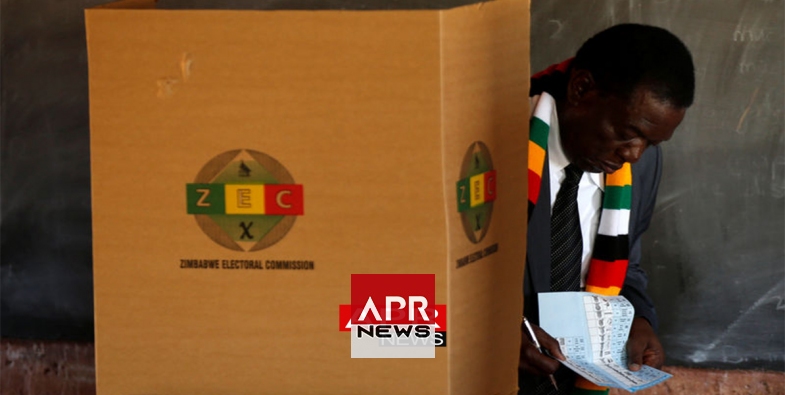 REUTERS - Zimbabweans voted on Monday in the first election since the removal of former president Robert Mugabe, a watershed moment they hope will rid the country of its pariah status and spark a recovery in its failed economy.

On the eve of the election, Mugabe emerged from eight months of obscurity since the military ousted him in a bloodless coup, to announce he would vote for the opposition, surprising former ally Mnangagwa who accused him of striking a deal with Chamisa.

After casting his ballot in the central city of Kwekwe, Mnangagwa was asked about Mugabe’s claim that the vote wouldn’t be free since it was being run by a “military government”.

“I can assure you that this country is enjoying democratic space which has never been experienced before,” Mnangagwa told public television outside the polling booth.

“In any democratic space and country, people have the freedom to express their views, negative or positive.”

Opinion polls give the former intelligence chief, who took over as president after the army ousted Mugabe, only a slim lead over Chamisa. There will be a runoff on Sept. 8 if no candidate wins more than half the votes.

Nicknamed “the Crocodile”, an animal famed in Zimbabwean lore for stealth and ruthlessness, Mnangagwa, of the Zimbabwe African National Union-Patriotic Front (ZANU–PF), has pledged to revive the moribund economy, attract foreign investment and mend racial and tribal divisions.

For Zimbabwe to be welcomed back into the international fold, get rid of painful sanctions and secure the donor funding it needs to stem chronic cash shortages, observers have to sign off on the vote as being credible.

FREE AND FAIR?
Elections under Mugabe were often marred by intimidation, rigging and widespread violence but the consensus is the build-up to this vote has been better than before, although Chamisa has complained of bias by the Zimbabwe Electoral Commission.

Chamisa, who honed his rhetorical skills in the courtroom and the pulpit, has attracted young and unemployed voters frustrated with nearly four decades of ZANU–PF rule.

“Victory is certain, the people have spoken,” Chamisa said after casting his ballot in Harare as a cheering crowd chanted: “President! president! The president is here!”

“I have no doubt that by end of day today we should be very clear as to an emphatic voice for change,” Chamisa said.

He will need a large turnout from his supporters in towns and cities, with ZANU-PF dominant in the countryside.

“I’ll vote for Chamisa because it is a vote for change, it is a vote for the youth. Tomorrow we will have a new president,” said Fabian Matsika, a security guard who woke at 4:30 a.m. to travel to his polling station on the outskirts of the capital.

“ZANU-PF is the only party that I have voted for,” said Elizabeth Kamhunga, 67, after casting her vote at a school in the Harare suburb of Malbereign.

“We may have made some mistakes but I think President Mnangagwa is the only person who has the interests of Zimbabwe at heart.”

MUGABE INTERVENES
Mugabe, one of the last “Big Men” of African politics, still looms large over Zimbabwean society and his endorsement of the opposition may yet influence the first vote without his name on the ballot paper since independence from Britain in 1980.

There have been reports of intimidation and coercion and state media are biased towards ZANU–PF. Chamisa’s Movement for Democratic Change (MDC) has complained about a flawed voters’ roll and opaque ballot paper printing.

Dozens of people were killed ahead of a runoff in 2008 between Mugabe and MDC-founder Morgan Tsvangirai, who died of cancer in February. Tsvangirai pulled out of the second round vote in an effort to end the bloodshed.

International observers from the European Union, the United States and the Commonwealth are watching polling stations across the country.

“However the public’s faith in the secrecy of the ballot is essential for the credibility of the process. We urge the authorities to do everything possible to ensure the secrecy of today’s vote.”

Mnangagwa has made a big effort to win over foreign opinion; hosting Western ambassadors, courting investors and patching up relations with white commercial farmers who were violently evicted from their farms under Mugabe.

Whoever wins will face the mammoth task of putting Zimbabwe back on track after 37 years of Mugabe rule tainted by corruption, mismanagement and diplomatic isolation, sending one of Africa’s most promising economies into crisis.

“However, until this is achieved, the country’s development will be severely restricted.”

Unusual: The woman with two vaginas.
An Australian woman is all the rage on OnlyFans because of a unique...
2463 vues
2

India : Exhausted Migrants Fell Asleep On Tracks. 17Run Over By...
Seventeen migrant workers in a group of 20 were killed after a cargo train...
1632 vues
3

United Kingdom : No more new petrol and hybrid cars from 2035
Prime Minister Boris Johnson is seeking to use the announcement to elevate...
1438 vues
4

Tears and singing as abducted Nigerian students return to parents
Nearly two months after their abduction by armed gunmen, more than two...
1367 vues