Zimbabwe teachers to strike over pay as currency crisis deepens 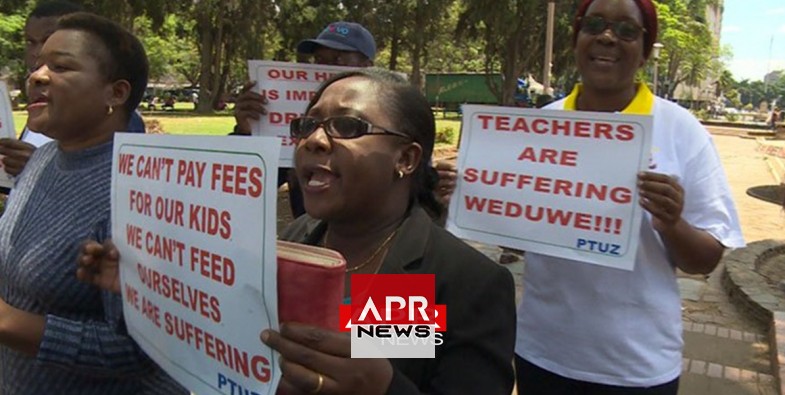 Zimbabwe teachers to strike over pay as currency crisis deepens

APRNEWS - Zimbabwean teachers will go on strike from Tuesday to press for salaries to be paid in U.S. dollars, a union said, as pressure builds on President Emmerson Mnangagwa to contain a runaway currency crisis.

Cash shortages have plunged Zimbabwe’s financial system into disarray, threatening social unrest and undermining Mnangagwa’s efforts to win back foreign investors who were sidelined under his predecessor Robert Mugabe.

With not enough hard currency to back up funds showing in bank accounts, the value of electronic money has plummeted, prompting businesses and civil servants to demand payment in U.S. dollars they can withdraw.

Just over four months into Mnangagwa’s contested presidency, the Zimbabwe Teachers’ Union (ZIMTA) said its members would strike as spiraling inflation has left them unable to buy basic goods and fuel that are in short supply. Government doctors have been on strike for more than a month over the same issue.

“To enable the teachers to report for work and to subsist, we demand the payment of salaries in U.S. dollars,” ZIMTA president Richard Gundane said in a statement dated Jan. 6.

Acting Labour Minister July Moyo was set to meet all government unions on Monday, according to an official circular.

On Monday police arrested 10 members of the smaller Amalgamated Rural Teachers Union of Zimbabwe who were picketing at a park in central Harare, according to a Reuters witness.

There was a heavy presence of police with water canon elsewhere in the capital.

As doctors continue their strike, Zimbabwe’s public hospitals have been left short of drugs and reliant on patients to buy them. Pharmacies have stopped accepting insurance policies for purchases and demand payment in dollars.

Zimbabwe is also struggling with acute shortages of fuel, forcing motorists to queue for hours.

Civil servant salaries accounted for 90 percent of the budget last year but Mnangagwa’s government has made an ambitious pledge to cut this to 70 percent in 2019 as part of reforms aimed at boosting growth and investment.

Mnangagwa came to power in November 2017 after Mugabe was forced to resign following an army coup. He was declared president in August 2018 after a presidential vote that his main opponent says he won fraudulently.

United Kingdom : No more new petrol and hybrid cars from 2035
Prime Minister Boris Johnson is seeking to use the announcement to elevate...
213 vues
2

India : Exhausted Migrants Fell Asleep On Tracks. 17Run Over By...
Seventeen migrant workers in a group of 20 were killed after a cargo train...
77 vues
4

No fresh cases in 42 districts in 28 days, clinical trials for...
The Indian Council of Medical Research (ICMR) has received approval to...
59 vues