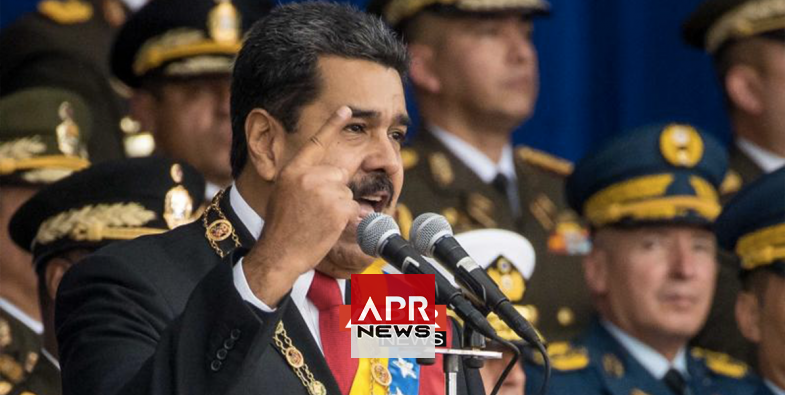 On Tuesday, Guaido - who has been recognized by more than 50 countries as the crisis-wracked country's interim president -- urged the armed forces to rise up against the embattled leader.

A small group heeded the call, but the movement failed to ignite -- the military leadership ratified their support for the government, and Maduro is standing his ground despite international pressure.

"Yes, we are in combat -- keep morale high in this fight to disarm any traitor, any coup plotter," Maduro said Thursday at a televised event with the military high command, at which he was surrounded by soldiers.

"No one can be afraid -- it is the hour to defend our right to peace," he said at a ceremony attended by 4,500 military personnel, according to the government.

Defense Minister General Vladimir Padrino said: "We've come to ratify our loyalty ... to the supreme commander of the armed forces, who is our only president, President Nicolas Maduro."

The failed uprising sparked two days of protests against the government in which four people were killed, including two teenagers who died of their injuries on Thursday.

Meanwhile, Venezuela's supreme court ordered the re-arrest of influential opposition figure Leopoldo Lopez -- who made a dramatic appearance alongside Guaido on Tuesday after he was freed from house arrest. Lopez has since taken refuge at the Spanish embassy.

The 48-year-old Lopez was a prominent opposition leader in 2014 when he was imprisoned after calling for protests against Maduro. He was transferred to house arrest in 2017.

In Washington, US President Donald Trump offered prayers at a White House service for "the people of Venezuela in their righteous struggle for freedom."

"The brutal repression of the Venezuelan people must end, and it must end soon," he warned.

Opposition lawmakers and family members announced Thursday that two teenage protesters had succumbed to injuries sustained in the anti-government protests.

Yoifre Hernandez, 14, was hit by gunfire during Wednesday's clashes in Caracas, while 16-year-old Yosner Graterol suffered a gunshot wound during unrest in the northern town of La Victoria on Tuesday, lawmakers and relatives said.

Jurubith Rausseo, 27, died Wednesday after being shot in the head, the non-governmental Venezuelan Observatory of Social Conflict said on Twitter. Another person was killed in the northern state of Aragua on Tuesday.

Human rights organizations and health services reported that dozens of people were hurt on both Tuesday and Wednesday.

The government said more than 150 people were arrested on Tuesday.

So far, 25 rebel soldiers have sought asylum at the Brazilian embassy.

Speaking from the Spanish ambassador's residence, Lopez said the small rebellion on Tuesday would eventually lead to the end of Maduro's "dictatorship."

"It's a crack that will become a bigger crack ... that will end up breaking the dam," said Lopez.

Madrid said it would not hand over Lopez to Venezuelan authorities, nor would it ask him to leave.

Tensions in Venezuela have soared since Guaido, who heads the national legislature, invoked the constitution to declare himself acting president on January 23, claiming Maduro's re-election last year was illegitimate.

The country has suffered five years of recession marked by shortages of basic necessities as well as failing public services, including water, electricity and transport.

On both Tuesday and Wednesday, security forces fired tear gas and rubber bullets at stone-throwing protesters.

UN Secretary General Antonio Guterres warned Venezuela's authorities not to use deadly force against demonstrators, while the US and Russia accused each other of making the crisis worse, evoking their Cold War-era confrontations.

US Secretary of State Mike Pompeo and Russian Foreign Minister Sergei Lavrov are to discuss Venezuela when they meet in Finland next week, a US official said.

"We're going to remain in the streets until we achieve freedom for the Venezuelan people," Guaido told his supporters in Caracas on Wednesday. Pro-Maduro groups also marched through the capital on May Day.

The International Contact Group of 13 countries -- including Britain, France, Germany and Maduro's ally Bolivia -- announced a meeting in Costa Rica on Monday and Tuesday to discuss the latest flare-up in Venezuela's simmering crisis.

United Kingdom : No more new petrol and hybrid cars from 2035
Prime Minister Boris Johnson is seeking to use the announcement to elevate...
251 vues
2