US enlists UN to keep sanctions pressure on North Korea 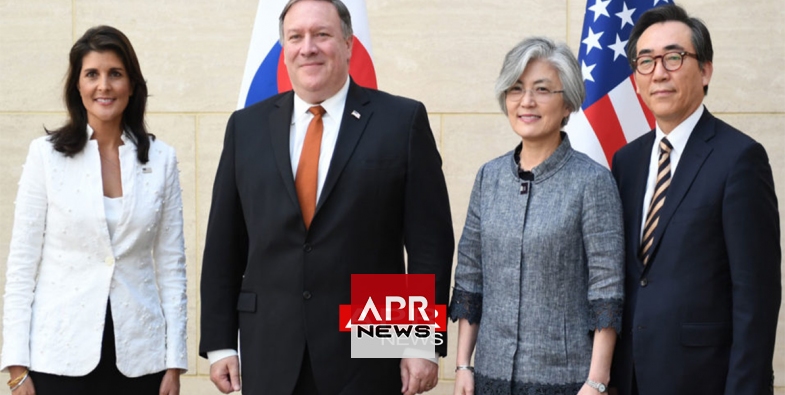 US enlists UN to keep sanctions pressure on North Korea

APRNEWS - US Secretary of State Mike Pompeo on Friday met with the UN Security Council for the first talks on North Korea since Donald Trump and Kim Jong Un’s summit — and was to urge the top UN body to keep the pressure on Pyongyang.

Pompeo was to update the council on Washington’s drive to persuade North Korea to scrap its nuclear and missile programs — and try to convince them that maintaining sanctions on Kim’s regime is crucial.

Trump opened up prospects for an end to the standoff with North Korea when he met in Singapore on June 12 with Kim, who agreed to work toward denuclearization of the peninsula.

The agreement however was short on details. And more than a month later, no concrete progress has been reported.

After Pompeo traveled to Pyongyang this month to try to make headway, North Korea complained that the United States was making “gangster-like” demands for rapid denuclearization.

On her way into the meeting, South Korean Foreign Minister Kang Kyung-wha said Kim needed to be held accountable for his promises.

“They have made a clear commitment on complete denuclearization repeatedly and of course very forcefully at the Singapore summit with President Trump, and we will hold them up to that commitment,” Kang said.

Diplomats said they expected Pompeo to ask the council to maintain a firm stance toward North Korea and keep sanctions in place — despite resistance from China and Russia.

China and Russia have argued that North Korea should be rewarded with the prospect of eased sanctions for opening up dialogue with the United States and halting missile tests.

Pompeo’s talks in New York, also attended by Kang and Japan’s UN Ambassador Koro Bessho, came a day after Russia and China put a six-month hold on a US request to cut off deliveries of refined oil to North Korea.

Last week, the United States asked a UN sanctions committee to order a halt to shipments of oil products to North Korea after accusing Pyongyang of exceeding a cap on fuel deliveries with illegal imports.

Russia and China said they needed more time to consider the US request and to review Washington’s allegations of sanctions-busting by North Korea.

“We hope the relevant countries in the UNSC, can, based on solid evidence, make relevant decisions on whether to export oil” to North Korea, said Chinese foreign ministry spokeswoman Hua Chunying.

The United States last week sent a report to the sanctions committee that said North Korea had secured at least 759,793 barrels of oil products through ship-to-ship transfers at sea.

North Korean tankers reportedly obtain clandestine oil cargo in international waters from ships that often switch off their satellite tracking systems to prevent any monitoring of their activities.

Those sanctions banned North Korea’s exports of raw commodities while severely restricting supplies of oil — vital for the country’s military.