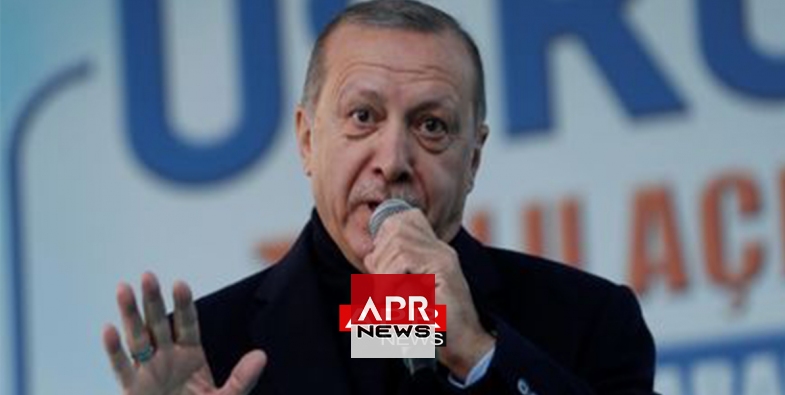 REUTERS - Turkey will start a new military operation in Syria east of the Euphrates river “in a few days”, President Tayyip Erdogan said on Wednesday, a move that could further complicate relations with the United States.

Ankara and Washington have long been at odds over Syria, where the United States has backed the YPG Kurdish militia in the fight against Islamic State insurgents. Turkey says the YPG is a terrorist organization and an extension of the outlawed Kurdistan Workers Party (PKK), which has waged an insurgency against the state in southeastern Turkey for 34 years.

Turkey has already intervened to sweep YPG fighters from territory west of the Euphrates in military campaigns over the past two years, but up until now, it had not gone east of the river - partly to avoid direct confrontation with U.S. forces.

But Erdogan’s patience with Washington over Syria - specifically a deal to clear the YPG from the town of Manbij, just west of the Euphrates - seems to have worn thin.

“We will start the operation to clear the east of the Euphrates from separatist terrorists in a few days. Our target is never U.S. soldiers,” Erdogan said at a speech at a defense industry summit in Ankara.

“This step will allow for the path to a political solution to be opened and for healthier cooperation.”

Turkey has repeatedly voiced frustration about what it says are delays in the implementation of the Manbij deal, saying last month that the agreement should be fully carried out by the end of this year.

Turkish and U.S. troops began joint patrols in northern Syria last month, but that cooperation has also been complicated as Turkey has shelled Kurdish fighters to the east of the Euphrates.

OBSERVATION POSTS
The United States has established observation posts along parts of the border between Turkey and Syria. The posts are designed to help keep the focus on fighting Islamic State in Syria, Defence Secretary Jim Mattis has said. The Pentagon says it has about 2,000 troops in Syria.

“At the direction of Secretary Mattis, the U.S. established observation posts in the northeast Syria border region to address the security concerns of our NATO ally Turkey,” Defence Department spokesman Colonel Rob Manning said this week.

“We take Turkish security concerns seriously and we are committed to coordinating our efforts with Turkey to bring stability to northeastern Syria.”

But Erdogan said Turkey was the victim of a “stalling tactic” over Manbij and said Islamic State no longer posed a threat in Syria.

“Now, it’s time to realize our decision to disperse the circles of terror east of the Euphrates. The fact that we have deep differences in perception with the United States is no secret,” he said.

“A stalling tactic has been used in Manbij and is still being used... There is no threat named Daesh in Syria anymore. This is a fairytale,” he said, using an Arabic acronym for the militant group.

The YPG still controls a large swathe of northeast Syria, on Turkey’s southern border. Turkey regards the YPG as an extension of the PKK. More than 40,000 people, mostly Kurds, have died in the PKK’s conflict with Ankara. Turkish authorities fear the conflict could be stoked by the YPG presence across the border.