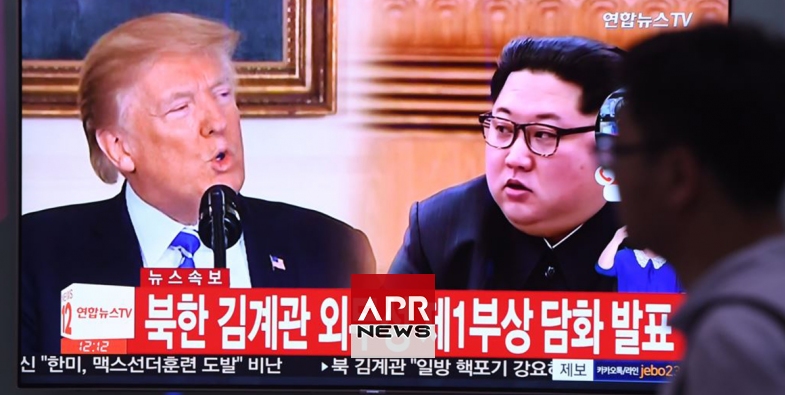 REUTERS- U.S. President Donald Trump acknowledged on Wednesday it was unclear if his planned summit with North Korean leader Kim Jong Un would go ahead, and said Washington would insist that North Korea give up its nuclear weapons despite Pyongyang’s threat to pull out of the meeting.

North Korea threw the June 12 summit into doubt on Wednesday, saying it might not attend if Washington continues to demand that it unilaterally abandon its nuclear weapons. North Korea also called off high-level talks with South Korea scheduled for Wednesday, blaming U.S.-South Korean military exercises.

“We’ll have to see,” Trump told reporters in the Oval Office when asked if the summit was still on.

“No decision, we haven’t been notified at all ... We haven’t seen anything, we haven’t heard anything,” he added, while saying he would continue to demand denuclearization.

Cancellation of the summit, the first meeting between a serving U.S. president and a North Korean leader, would deal a major blow to what would be the biggest diplomatic achievement of Trump’s presidency.

Trump has raised expectations for success even as many analysts have been skeptical about the chances of bridging the gap due to questions about North Korea’s willingness to give up a nuclear arsenal that it says can hit the United States.

The White House said it was still hopeful the summit would take place, but Trump was prepared for a tough negotiation.

Sanders said the North Korean comments were “not something that is out of the ordinary in these types of operations.”

North Korea’s first vice minister of foreign affairs, Kim Kye Gwan, cast doubt on whether the summit, which is set for Singapore, would be held.

He specifically criticized U.S. National Security Adviser John Bolton, who has called for North Korea to quickly give up its nuclear arsenal in a deal that would mirror Libya’s abandonment of its program for weapons of mass destruction.

“If the U.S. is trying to drive us into a corner to force our unilateral nuclear abandonment, we will no longer be interested in such dialogue and cannot but reconsider our proceeding to the ... summit,” he said.

North Korea clashed with Bolton when he worked under the Bush administration.

“We shed light on the quality of Bolton already in the past, and we do not hide our feeling of repugnance toward him,” Kim, the vice minister, said.

In an interview with Fox News Radio, Bolton brushed aside the remarks against him as “nothing new” and said odds were still in favor of the summit going ahead, but the United States would not soften its demands.

“I think that’s where the president is; we are going to do everything we can to come to a successful meeting, but we are not going to back away from the objective of that meeting which is complete, verifiable and irreversible denuclearization of North Korea.”

Sanders appeared reluctant to endorse the Libya model that the outspoken and hawkish Bolton has touted, most recently on U.S. television on Sunday.

She said the model that would be followed in dealing with North Korea was “the President Trump model.”

A U.S. official said the North Korean statements had taken the White House off guard after North Korean leader Kim’s diplomatic outreach both to the United States and South Korea.

Kim Kye Gwan derided as “absurd” Bolton’s suggestion that discussions with North Korea should be similar to those that led to components of Libya’s nuclear program being shipped to the United States in 2004.

“(The) world knows too well that our country is neither Libya nor Iraq which have met miserable fate,” Kim said in an apparent reference to the demises of Libyan leader Muammar Gaddafi and Iraqi former president Saddam Hussein.

He said North Korea was a nuclear weapon state while Libya had been at the initial stage of nuclear development.

The doubt thrown over the summit comes a week after Trump abandoned the 2015 nuclear deal between Iran and six world powers.

The North Korean statements marked a dramatic reversal in tone from recent months when Pyongyang appeared to embrace efforts to negotiate.

North Korea had announced it would publicly shut its nuclear test site next week and also improved the mood for a summit by releasing three detained Americans last week.

Some analysts and U.S. officials believe North Korea may be testing Trump’s willingness to soften the U.S. demand for complete denuclearization.

North Korea could also be trying to capitalize on an apparent gap in messaging between Bolton and U.S. Secretary of State Mike Pompeo.

Pompeo, who returned from his second visit to Pyongyang last week with the freed Americans, has stressed the economic benefits, possibly including U.S. investment, that could flow to the country if it agrees to denuclearize.

Kim Kye Gwan’s statement appeared to reject such promises, saying North Korea would never give up its nuclear program in exchange for trade with the United States.

“We have already stated our intention for denuclearization of the Korean peninsula and made clear on several occasions that precondition for denuclearization is to put an end to anti-DPRK hostile policy and nuclear threats and blackmail of the United States,” Kim said, using the acronym for North Korea’s official name, Democratic People’s Republic of Korea.

North Korea defends its nuclear and missile programs as a necessary deterrent against perceived aggression by the United States, which keeps 28,500 troops in South Korea, a legacy of the 1950-53 Korean War, which ended in a truce, not a peace treaty.

It has long said it is open to eventually giving up its nuclear arsenal if the United States withdraws its troops from South Korea and ends its “nuclear umbrella” security alliance with Seoul.

North Korea announced it was pulling out of the talks with South Korea after denouncing U.S.-South Korean “Max Thunder” air combat drills, which it said involved U.S. stealth fighters, B-52 bombers and “nuclear assets”.

A South Korean defense ministry official said the drills would go on as planned.

Speaking to reporters in Brussels on Wednesday, United Nations Secretary-General Antonio Guterres said: “I hope that in the end common sense will prevail, and the summit will take place and it will be successful.”

“Anyone who has had anything to do with DPRK in the past 20, 30, 40 years has seen that engaging in the political contact with DPRK is complex,” he said. “The road ahead will have bumps, and I think we are hitting one of the bumps at the moment.”