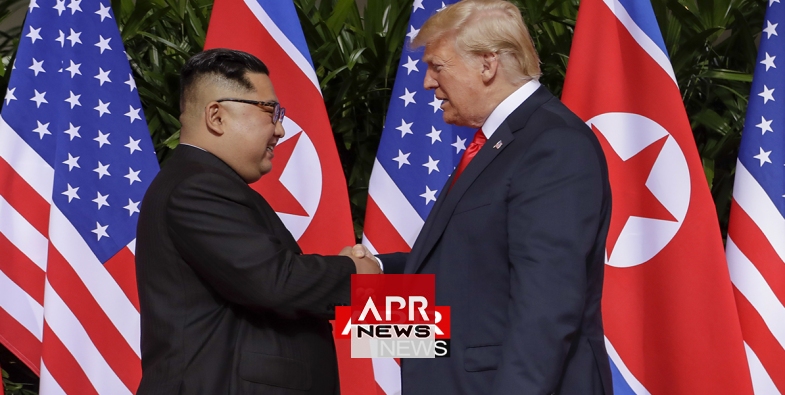 The joint statement signed at the end of their historic summit in Singapore gave few details on how either goal would be achieved but Trump fleshed out some details at a news conference.

“President Trump committed to provide security guarantees to the DPRK and Chairman Kim Jong Un reaffirmed his firm and unwavering commitment to complete denuclearization of the Korean Peninsula,” said the statement.

DPRK is the Democratic People’s Republic of Korea, the formal name of North Korea.

Trump told the news conference that the process would be verified, and that the verification “ will involve having a lot of people in North Korea”.

He also said Kim had told him North Korea was destroying a major engine-testing site used for missiles, but maintained international sanctions on Pyongyang would stay in place for now.

Trump said joint military exercises with South Korea would be halted. He said the move would save Washington a tremendous amount of money and would not be revived “unless and until we see the future negotiation is not going along like it should”.

“Some things were agreed and not reflected in the agreement,” Trump said.

Kim earlier said the two leaders had a historic meeting “and decided to leave the past behind. The world will see a major change.”

However, several political analysts said the summit had yielded symbolic, rather than tangible, results.

“It is unclear if further negotiations will lead to the end goal of denuclearization,” said Anthony Ruggiero, senior fellow of Washington’s Foundation for Defense of Democracies think tank. “This looks like a restatement of where we left negotiations more than 10 years ago and not a major step forward.”

The document made no mention of the sanctions and nor was there any reference to finally signing a peace treaty. North Korea and the United States were on opposite sides in the 1950-53 Korean War and are technically still combatants, as the conflict, in which millions of people died, was concluded only with a truce.

RUSSIA, CHINA POSITIVE
But the joint statement did say the two sides had agreed to recover the remains of prisoners of war and those missing in action so that they could be repatriated.

China, the third party to the truce, said it hoped North Korea and the United States could reach a basic consensus on denuclearization.

“At the same time, there needs to be a peace mechanism for the peninsula to resolve North Korea’s reasonable security concerns,” China’s top diplomat, state councillor Wang Yi, told reporters in Beijing.

Russia’s deputy foreign minister said the Kremlin had a positive assessment of the summit but “the devil is in the details”, the Tass news agency reported.

If the summit does lead to a lasting detente, it could fundamentally change the security landscape of Northeast Asia, just as former U.S. President Richard Nixon visit to China in 1972 led to the transformation of China.

“ There is no concrete detail on the denuclearization of the Korean peninsula and the provision of security guarantees by the United States,” Li said. “It is too early to call it a turning point in North Korea-U.S. relations.”

The dollar however jumped to a 3-week top and Asian shares rose on news of the agreement.

Trump said he had formed a “ very special bond” with Kim and that the relationship with North Korea would be very different in the future.

“I learned he’s a very talented man. I also learned that he loves his country very much.”

During a post-lunch stroll through the gardens of the Singapore hotel where the summit was held, Trump said the meeting had gone “better than anybody could have expected”. 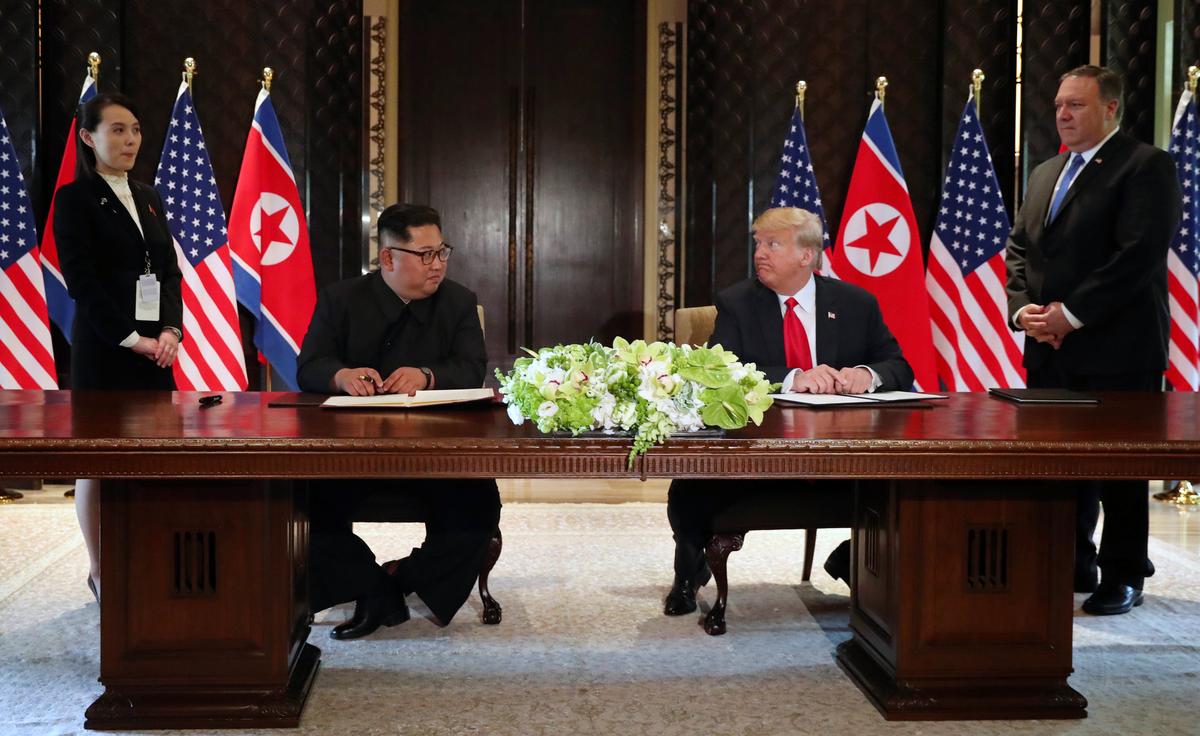 Kim stood silently alongside, but the North Korean leader had earlier described their summit as a “a good prelude to peace”.

Both men walked to Trump’s bullet-proof limousine, nicknamed “The Beast”, and looked in at the rear seat, with Trump apparently showing Kim something inside. They then resumed their walk.

OLD REGIMENTAL MESS
They had appeared cautious and serious when they first arrived for the summit at the Capella hotel on Singapore’s Sentosa, a resort island with luxury hotels, a casino, manmade beaches and a Universal Studios theme park.

But, with cameras of the world’s press trained on them, they displayed an initial atmosphere of bonhomie as they met on the verandah of the Capella, a refurbished 19th century British regimental officers’ mess.

Body language expert said both men tried to project command as they met, but also displayed signs of nerves.

After a handshake, they were soon smiling and holding each other by the arm, before Trump guided Kim to the library where they held a meeting with only their interpreters. Trump had said on Saturday he would know within a minute of meeting Kim whether he would reach a deal.

After initial exchanges lasting around 40 minutes, Kim was heard telling Trump through a translator: “I think the entire world is watching this moment. Many people in the world will think of this as a scene from a fantasy...science fiction movie.”

One of the world’s most reclusive leaders, Kim visited Singapore’s waterfront on Monday, smiling and waving to onlookers, adding to a more affable image that has emerged since his April summit with South Korean leader Moon Jae-in.

The Swiss-educated leader, who is believed to be 34, has not left his isolated country since taking office in 2011, apart from visiting China and the South Korean side of the border Demilitarised Zone, which separates the two Koreas.

But just a few months ago, Kim was an international pariah accused of ordering the killing of his uncle, a half-brother and hundreds of officials suspected of disloyalty.

But within his country, the summit is likely to go down well. 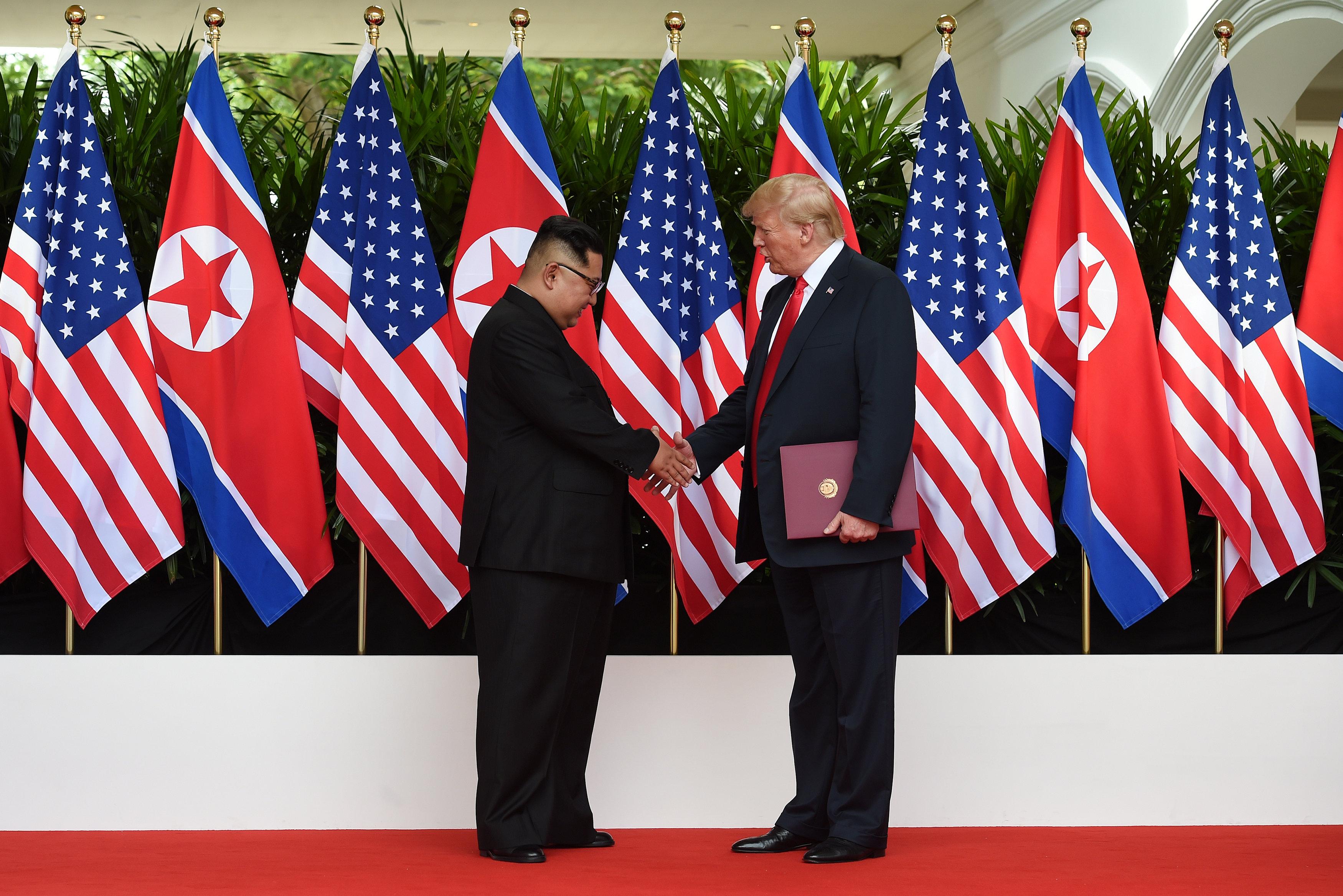 “Signing the joint statement would show North Korean citizens that Kim Jong Un is not a leader just within North Korea but also in international society, especially with his position equivalent to Trump,” said Ahn Chan-il, a defector from North Korea who currently lives in the South.