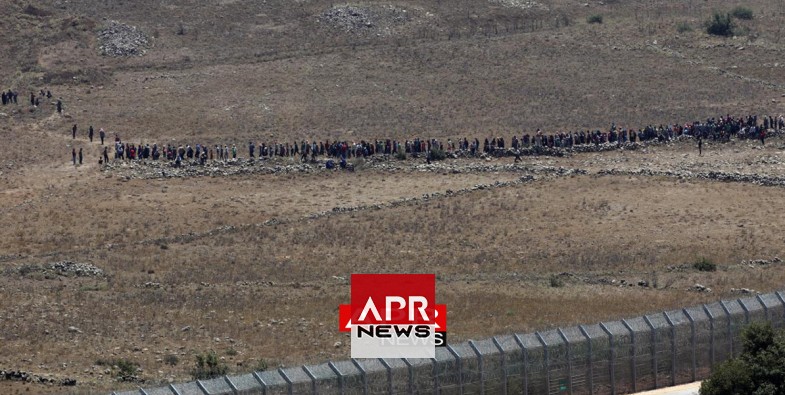 REUTERS - Dozens of Syrians approached the Israeli frontier on the Golan Heights on Tuesday in an apparent attempt to seek help or sanctuary from a Russian-backed Syrian army offensive, before turning back after a warning from Israeli forces.

Tens of thousands of Syrians have arrived near the frontier with the Israeli-occupied Golan Heights in the past month, fleeing the offensive which has recovered much of the southwest from rebels.

“Go back before something bad happens. If you want us to be able to help you, go back,” an Israeli army officer on the Israeli side of a frontier fence told the crowd in Arabic through a megaphone. “Get a move on.”

Israel has given humanitarian aid to refugees in encampments close to a 1974 Israeli-Syrian disengagement line on the Golan but has said they would not be allowed to cross into Israeli-held territory.

A witness on the Syrian side of the frontier said people were seeking shelter wherever they could as the offensive drew closer to their location.

The Syrians who approached the frontier fence stopped some 200 meters (yards) away, before an Israeli soldier told them to leave.

“You are on the border of the State of Israel. Go back, we don’t want to hurt you,” the soldier shouted in Arabic through a loudspeaker at the crowd, live Reuters TV footage showed.

The crowd, which included women and children, then walked back slowly toward the refugee encampment. Some stopped mid-way and waved white cloths in the direction of the Israeli frontier.