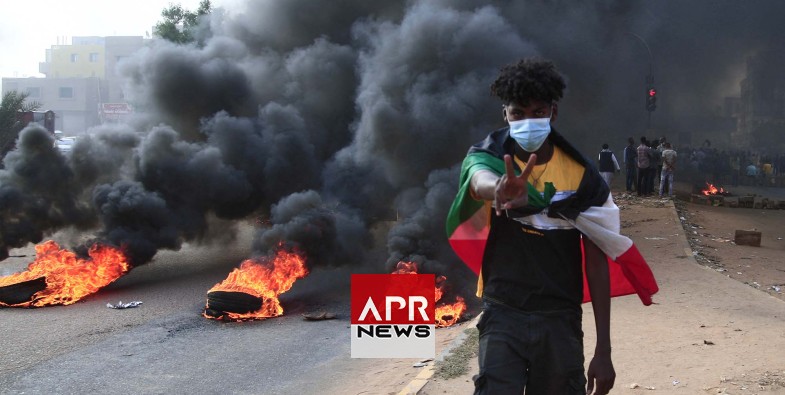 In Sudan, tens of thousands of demonstrators march on Thursday under tear gas canisters to demand civilian power, while the country has been controlled by the army since its independence.

Violence broke out again on Thursday, December 30, in Sudan where four demonstrators were killed and dozens wounded among a crowd that shouts at the military power, braving live ammunition, tear gas canisters and cut off communications.

According to a union of pro-democracy doctors, the four demonstrators were shot dead in Omdurman, the northwestern suburb of Khartoum, linked to the capital by a bridge.

In a call relayed by Facebook pages maintained by Sudanese living abroad, the doctors deplored that the police "prevent ambulances from approaching" the victims. They called in reinforcement of doctors at the Arbaïn hospital in Omdurman "because the putschists use live ammunition against the demonstrators", reporting "dozens of wounded".

To prevent the gatherings as much as possible, the police had installed the containers at night on the deck. In addition, the security forces - police, military and paramilitary of the Rapid Support Forces had installed cameras on the main axes of Khartoum.

It is impossible to know exactly what the extent of the repression was because the authorities also cut off mobile internet and local telephone calls from abroad in the morning. A first and above all a hard blow for the activists who are trying to mobilize the world to their cause, via social networks and the diaspora.

In addition, Dubai-based satellite television Al-Arabiya reported that several of its journalists were injured in an attack on his office by the security services.

The local channel al-Sharq also claimed to have been prevented from covering the day's news by the security forces.

With each new call from the demonstrators proclaiming that "the revolution continues" against the head of the army, General Abdel Fattah al-Burhane, who reinforced his power with a putsch on October 25, the authorities mobilize new techniques to try to 'stem the opposition.

"No to military power"

This did not prevent tens of thousands of demonstrators chanting again Thursday "No to military power" and "The soldiers to the barracks!" in Khartoum but also in Kessala and Port-Sudan in the east or in Madani, south of the capital.

In the capital, a demonstrator told AFP to march "for the fall of military power" and especially "against the political agreement", a text which recently allowed the civilian Prime Minister, Abdallah Hamdok, to leave house arrest but also to General Burhane to remain at the head of the transitional authorities for two more years.

For another protest in Khartoum, civilians should never have agreed to join the sacred union of 2019. So the street and its "revolution" forced the generals to dismiss one of theirs, the dictator Omar al-Bashir. And civilians and soldiers decided to lead the country together towards democracy.

"Signing with the military was a mistake from the start," he told AFP, because, for him, the generals in power are "Bashir's men".

An accusation that the street often relays, accusing Abdallah Hamdok of having "betrayed" by "promoting the return of the old regime".

Thursday, a few hundred meters from the presidential palace in Khartoum where the Sovereign Council, the highest authority of the transition headed by General Burhane, sits, the security forces fired tear gas canisters.

Protesters evacuated the wounded, while the crowd approached the building and moved away from it at the mercy of police charges.

As of Wednesday, the American embassy had called for "extreme restraint in the use of force", while in two months of anti-coup mobilization, 48 demonstrators were killed and hundreds wounded by gunshot.

Between tear gas canisters, live ammunition in the air and beatings with sticks to disperse the crowd, 235 people were injured Saturday in the national mobilization, according to a union of pro-democracy doctors.

The American embassy also calls on the authorities "not to resort to arbitrary detentions", while activists report new nightly raids at their homes, as often on the eve of each demonstration.

On December 19, the third anniversary of the "revolution", the security forces were accused by the UN of having raped demonstrators in an attempt to break the anti-coup protest a "correction of the course of the revolution", according to General Burhane .

Stuck in inflation at over 300%, Sudan still has no government, a sine qua non for the resumption of international aid, vital for this country, one of the poorest in the world.

As for Abdallah Hamdok, he poses the threat of a possible resignation, if we are to believe the regular leaks of the local press which ensures that he would appear only rarely in his office.