Russia 2018: Match of the day – Nigeria Vs Argentina preview 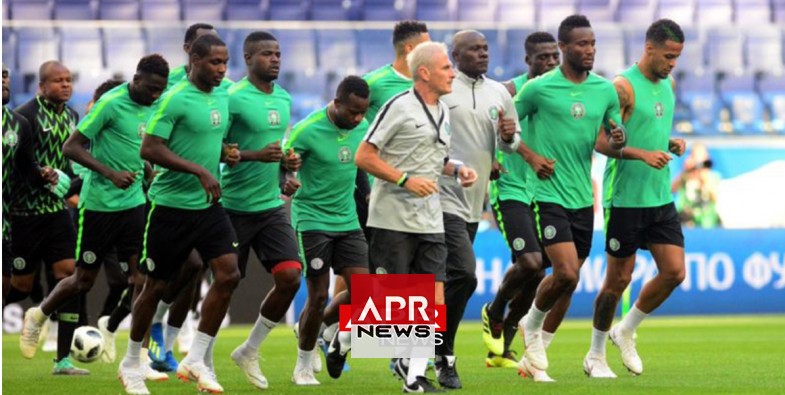 Russia 2018: Match of the day – Nigeria Vs Argentina preview

APRNEWS - Group: Group D
Venue: Saint Petersburg Stadium
Time: 7 pm
Teams: Nigeria vs Argentina
In the final group game, the Super Eagles will play against Argentina in St. Petersburg for a spot in the last 16 for a fourth time.

There are still a fair bit of permutations for the Super Eagles to qualify to the next round, but it’s far from the head-spinning challenge that the team sometimes require hopeful fans to crack.

Thankfully, the Super Eagles have their fate in their hands; win and it’s smooth sailing into the second round.

However, a draw complicates things, causing side glances at the happenings at the Rostov Arena with crossed fingers and hopeful hearts keen on a Croatia win, draw or loss with not more than two goals.

A loss to Argentina eliminates the Super Eagles from qualifying to the second round with either Argentina or Iceland going ahead.

After the World Cup draws were made, the expectation was measured with the potentially difficult group.

The disappointing loss to Croatia worsened things but following Ahmed Musa’s brace against Iceland, there’s that truckload of belief again in the Super Eagles.

However, Nigeria need to produce a rousing performance to scale through to the next round.

Admittedly, Argentina have been largely below par in the tournament with a limp and dire display in the Croatia loss following an uninspiring draw to Iceland.

Nonetheless, the South Americans are a side with quality individuals to force the issue in a make-or-break fixture for them. They were faced with a similar situation against Ecuador in the World Cup qualifiers, Lionel Messi scored a stunning hat-trick to rescue his side.

Gernot Rohr’s side will be faced against a bruised side; the Super Eagles need be wary.

Rohr is expected to use the 3-5-2 which was successful against the Icelandic team.

Considering that the burden is on Jorge Sampaoli’s side to take the initiative and attack, it could work a treat for the Super Eagles, who are predominantly a counter-attacking side.

However, Rohr’s men have shown another string to their bow in this World Cup with the team retaining possession in the middle third, trying to build play.

Still, the pace of Musa and Moses and Oghenekaro Etebo’s mobility should cause the Super Eagles to break hard and fast from turnovers.

It’s the final hurdle for the Eagles in the group stage, as much as they have the support of many, there is also the burden of expectation to get a result against a side they defeated 4-2 months ago in Russia.