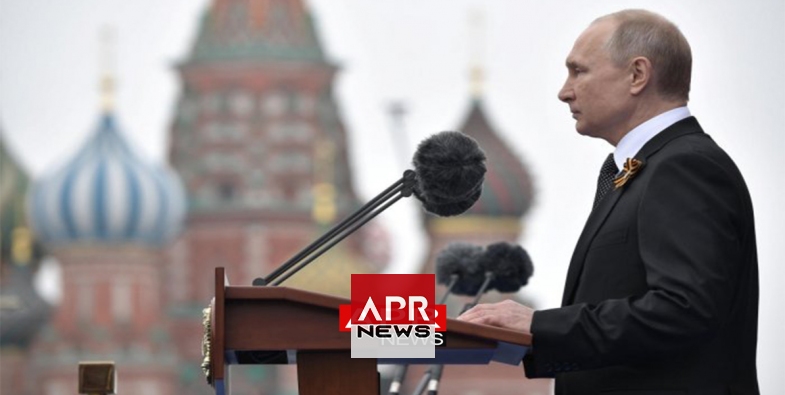 The president’s speech to thousands of soldiers and veterans on Red Square came at the start of an annual parade that ses hundreds of pieces of military hardware roll through the streets of Moscow.

“The lessons of the past war are relevant once again. We have done and will do all that is necessary to guarantee the high capabilities of our armed forces,” he said.

Those in the modern Russian army remember the “oath” of Soviet soldiers who fought Nazi Germany, he added: “I die but I will not surrender”.

The two-day public holiday to celebrate the 1945 victory comes this year amid heightened tensions with the West and fears of a new Russia-US arms race.

Moscow also recently said it would build up its military presence in the Arctic, seeking to assert its influence in the strategic region.

Parades and celebrations took place in towns and cities across the country, from the European exclave of Kaliningrad to the Far Eastern Sakhalin Island, near Japan.

However a fly-by planned for the capital was cancelled because of poor weather, news agencies reported.

State television broadcast marches from around the former USSR, including from the unrecognised republic of Lugansk — a Ukrainian breakaway region run by Russia-backed separatists.

The conflict between Kiev’s forces and the separatists has cost some 13,000 lives over the last five years.

Almost half of Russians said they planned to attend a Victory Day event this year, according to state pollster VTsIOM.

United Kingdom : No more new petrol and hybrid cars from 2035
Prime Minister Boris Johnson is seeking to use the announcement to elevate...
816 vues
2

India : Exhausted Migrants Fell Asleep On Tracks. 17Run Over By...
Seventeen migrant workers in a group of 20 were killed after a cargo train...
759 vues
3

No fresh cases in 42 districts in 28 days, clinical trials for...
The Indian Council of Medical Research (ICMR) has received approval to...
648 vues