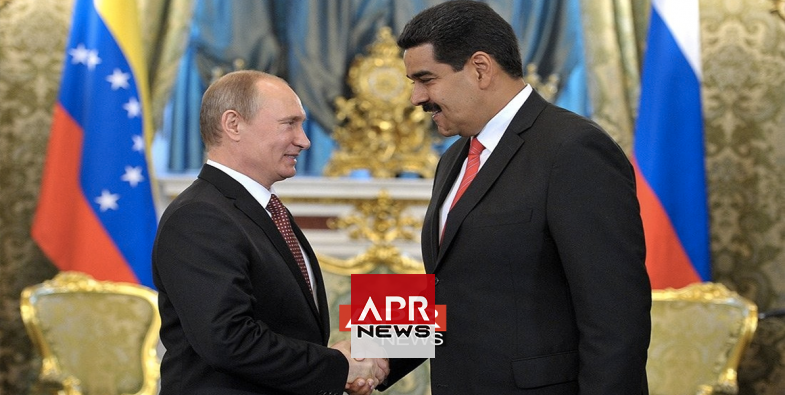 APRNEWS - Russia emerged as a crucial power broker in the crisis in far-away Venezuela this week when Washington accused Moscow of convincing President Nicolas Maduro not to flee to Cuba.

US Secretary of State Mike Pompeo said Maduro had a plane on the tarmac ready to fly to Havana when "the Russians indicated that he should stay".

Moscow hit back, dismissing the claim as fake and accusing Washington of supporting a coup "that has nothing to do with democracy" by backing opposition leader Juan Guaido.

Moscow has its reasons for standing behind Maduro -- he's a rare ally in Latin America and Russia has poured billions into the Venezuelan economy.

But analysts say Russian President Vladimir Putin is also playing the long game, hoping to use Venezuela as leverage in his global tug-of-war with Washington.

"Russia is seeking to translate its influence over Maduro -- which is in fact not absolute -- into an opportunity to have dialogue with the United States," Tatyana Stanovaya, head of R.Politik, a Paris-based analysis firm, told AFP.

"Maduro is a bargaining chip."

Tensions in Venezuela have soared since Guaido declared himself acting president in January, claiming Maduro's re-election last year was illegitimate.

More than 50 countries led by the United States lined up behind the 35-year-old head of the National Assembly, but Russia and China have backed Maduro.

Reeling from Western sanctions, Moscow has quickly sensed an opportunity, even if it meant locking horns with the United States in Latin America, Washington's traditional sphere of influence.

In a highly publicised move in March, Moscow sent two planes with around 100 soldiers and equipment to Caracas, where Russian mercenaries are also believed to be operating.

Ties between Russia and the West plummeted over Moscow's annexation of Crimea in 2014, its backing for separatists in eastern Ukraine and military support for President Bashar al-Assad in Syria.

But the audacity with which the Kremlin inserted itself into the Venezuela crisis has drawn gasps in Washington.

"Russia is making the next play in our hemisphere," Frederick Kempe, president of the Atlantic Council, wrote last month.

"Vladimir Putin may be laying the ground for making Venezuela the defining foreign policy debacle for President Trump in the same way Syria became that for the Obama administration."

Russia and Venezuela enjoy a long history of ties and Maduro's predecessor Hugo Chavez, known for his passionate tirades against the United States, was a welcome guest at the Kremlin.

After Chavez's death in 2013 the relationship with a country that boasts the world's largest proven oil reserves has continued to thrive.

Russia is the second largest lender to Caracas after China, with Moscow heavily investing in Venezuela's oil resources and Caracas acquiring Russian arms worth billions of dollars.

However that also means, analysts say, that Russia has a lot to lose from a change in leadership. But what it stands to gain from a possible deal with Washington may be more important for the Kremlin.

"Putin would cut a deal, if in agreeing to let Maduro leave he got something really big from Trump in exchange," said Timothy Ash, a strategist at BlueBay Asset Management.

He suggested that Moscow wanted Washington to lift the damaging sanctions, to allow Russian oil companies to freely operate in Venezuela and agree on "spheres of influence".

"I think they (the Trump administration) would be happy to cut a deal with Putin, where he gets his troops out of Venezuela, in return for the US turning a blind eye to developments in Ukraine," Ash said.

Pompeo and Russian Foreign Minister Sergei Lavrov are set to discuss the Venezuela crisis on the sidelines of an Arctic Council meeting starting Monday in Finland.

In duelling statements this week, Pompeo accused Moscow of "destabilising" Venezuela while Lavrov said Washington was a "destructive influence" in the country.

Events on the ground may matter more. After the military uprising in support of his bid fizzled out this week, Guaido has called for demonstrations at army bases.

Other experts doubt Russia's real ability to influence the crisis.

The Trump administration is "greatly exaggerating the role of Russia and China. I don't think that's a decisive factor at all," said Ted Galen Carpenter, a senior fellow at the Cato Institute, a libertarian think-tank in Washington

"Maduro's base of power remains reasonably intact. The military will be the key power."

United Kingdom : No more new petrol and hybrid cars from 2035
Prime Minister Boris Johnson is seeking to use the announcement to elevate...
816 vues
2

India : Exhausted Migrants Fell Asleep On Tracks. 17Run Over By...
Seventeen migrant workers in a group of 20 were killed after a cargo train...
759 vues
3

No fresh cases in 42 districts in 28 days, clinical trials for...
The Indian Council of Medical Research (ICMR) has received approval to...
647 vues