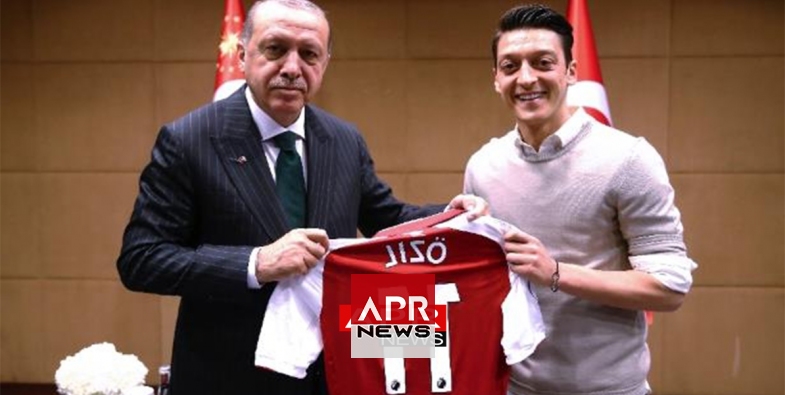 APRNEWS - Mesut Ozil's decision to quit playing for Germany unleashed a racism storm in Berlin on Monday, but earned the applause of Ankara with a Turkish minister hailing "a goal against the virus of fascism".

After months of silence over a controversial photograph with Turkish President Recep Tayyip Erdogan in May, which sparked questions about his loyalty to Germany, Ozil erupted on Sunday.

Ozil, a key member of the squad which won the 2014 World Cup, blamed the DFB management, in particular its president Reinhard Grindel, for failing to side with him against his critics.

"In the eyes of Grindel and his supporters, I am German when we win, but I am an immigrant when we lose," Ozil wrote.

The 29-year-old said he was true to both his Turkish and German origins and insisted he did not intend to make a political statement by appearing with Erdogan just before the World Cup finals.

"I have two hearts, one German and one Turkish," said Ozil, who has been repeatedly singled out for criticism after Germany's woeful performance at the World Cup saw them crash out after the group stages.

Ozil's explosive statement, in three separate postings on Twitter and Instagram, was hailed by the Turkish government of Erdogan, who has championed a campaign against what Ankara sees as growing Islamophobia in Europe.

"I congratulate Mesut Ozil who by leaving the national team has scored the most beautiful goal against the virus of fascism," Justice Minister Abdulhamit Gul wrote on Twitter.

But it was met with a mix of dismay and outrage in Germany.

Justice Minister Katarina Barley wrote on Twitter that it was an "alarm sign if a great, German footballer like Mesut Ozil no longer feels wanted in his country or represented by the DFB."

Cem Ozdemir of the Greens party also voiced dismay that "young German-Turks now get the impression that they have no place in the German national team".

At the same time, Ozdemir, who himself has Turkish roots, voiced disappointment that Ozil "did not live up to his function of setting examples" by failing to distance himself from Erdogan.

"Posing with the sole ruler Erdogan is disrespectful to those who are being persecuted in Turkey or put arbitrarily in prison," he said.

Germany's country's best-selling newspaper Bild led the charge of criticism against Ozil, calling his statement a "whiny resignation" and slamming him for heaping "criticism on everyone but himself".

Bild, which has for weeks has been calling for Ozil to be dropped from the starting team , also hit back against the midfielder's claims that his Turkish origin and Erdogan photo have been used by some media to pander to the far-right.

"Ozil's world view here is dangerously close to Erdogan and his despots," charged the tabloid-style daily.

The photo, which was published on the presidential website and the Twitter feed of the ruling party, came just before the June 24 polls Erdogan won to claim sweeping new powers.

Ozil said that despite the timing of the picture "it wasn't about politics or elections, it was about me respecting the highest office of my family's country".

Born and raised in Gelsenkirchen, Ozil, who has scored 23 goals and made 40 assists in 92 appearances for Germany, is third-generation German-Turk and counts among more than three million people of Turkish origin in Germany.

In his statement, Ozil underlined how he felt "hurt" by his school which he said did not want him to appear in an event there because of the raging criticism against him over the Erdogan affair.

The DFB has so far stayed mum, and in a first reaction from his former teammates, defender Jerome Boateng wrote on Twitter only using the Turkish word for "brother": "It was a pleasure, Abi."

Former DFB chief Theo Zwanziger warned that the debacle was a "serious blow to the integration efforts in our country that goes beyond football".

For Tagesspiegel, the entire affair was a "watershed for sports, politics and society."

While the newspaper noted that Ozil's thinking that a photograph could be non-political was "naive", it said that the debacle had far reaching consequences.

"Ultimately, Ozil did not fall because of Grindel but because of a heated, populist mood in Germany," it said.

"The danger exists because many who also have family roots in other countries or culture, can understand Ozil's mood. And this needs to be countered quickly and decisively.

"Because more is at stake than just the future of the German national football team."