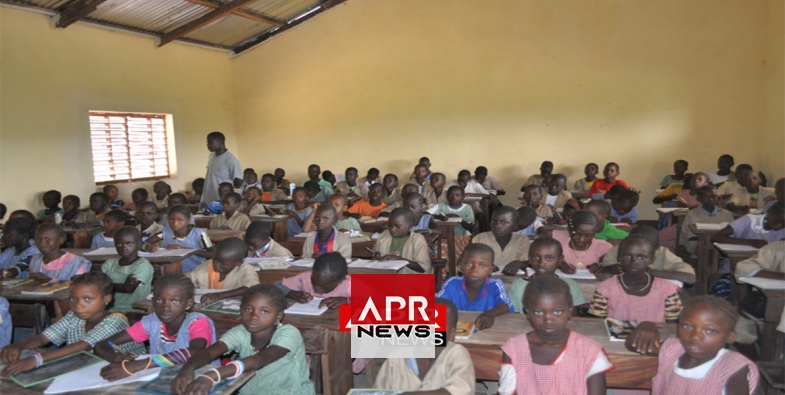 APRNEWS - The emotional and physical challenges occasioned by overcrowding in Nigeria’s public schools are well-documented in various surveys and studies. In this piece, Head, Education Desk, Iyabo Lawal, explores other consequences of overcrowded classrooms in the country.

Wearied eyes, their brows drip with sweat. The sweltering weather was worsening but they remained packed in a classroom that could hardly contain them waiting for the teacher to arrive. The noon sun worsened even more and by now the young scholars were wiping the sweat off their faces with the sleeves of their uniforms. By now, the collars of their uniforms have become blackened by the accumulation of sweat at the nape of their necks.

By the time the teacher entered the classroom, the students were already red-eyed, struggling to stay awake. In a couple of minutes, beads of sweat began to form on the brow of the teacher. He dabbed his face with a white handkerchief. He grabbed a book from the desk of pupil. He fanned himself momentarily.

“OK class! I don’t know how we’re going to have an afternoon period with everywhere so hot. You should tell your parents to tell the government to build classrooms and not prisons,” he said.

The teacher scribbled some homework on the chalkboard – class has ended for that day.

“That’s what usually happens in our school,” a young pupil, who spoke on the condition of anonymity, said. “We’re more than 100 in my class. There are not enough chairs and desks in many classrooms in the school. We’re just too much in this school.”

By saying, “we’re too much in this school”, the student meant that most of the classrooms in that particular school were overcrowded with pupils.

A teacher, Odion Edosa, at Ihogbe College in Benin City, grappling with a population of 78 students said in a media report: “It is tough, especially since I spend a lot of time getting them to sit quiet and listen. Fortunately, the cane is always at hand but flogging is tiring. How many students will I flog, how long will I continue flogging? I mostly feel sorry for those teaching younger classes. What can we do, we must continue to teach.”

According to a report by the Data Centre of United Nations Educational, Scientific and Cultural Organisation (UNESCO) Institute for Statistics, of all the 189 countries, Nigeria is among four nations with the highest number of overcrowded classrooms in its secondary schools.

Increase in pupils’ enrolment in Nigeria’s public schools is a major concern to all stakeholders with classrooms bursting at their seams. Even though governments at various levels seem to be making spirited efforts at getting out-of-school children back into the class, stakeholders argue that there is no commensurate attempt to improve on infrastructure and build more schools, classrooms and recruit more teachers.

The actual number of students recommended by the UNESCO for a single classroom is between 30 and 35 and any classroom that has an extra student is considered to be overcrowded and not good for learning and teaching.

The crisis of overcrowding is better experienced than reported. At Ijaiye Housing Estate Senior School in Lagos State, it was reported that a classroom has up to 160 students.

“Most of our classes, especially SSI and SS2, have up to 10 arms (A-J) each, and each class has 80 students or more. And because of space challenge, some of these classes only exist on paper and not in physical form of a classroom setting,” she disclosed.

“SS1 ‘A’ and SS1‘B’ are two separate classes on paper. But in reality, they are merged into one classroom as a science class with no fewer than 160 students all together. That is how SS1 ‘C’ and SS1 ‘D’ and some other arts and commercial classes are equally structured,” a student at the school was quoted as saying.

The overpopulation in that school is compounded by the institution’s often dilapidated and inadequate facilities.

To find a ‘comfortable’ place to sit and learn in the school is said to be a battle for survival requiring students to arrive the school earlier than usual. A student is also likely going to lose that space if he or she goes out for any reason.

It may be easy to use Lagos schools as example of how devastating overcrowding in classrooms is, the crisis of overcrowding runs across the country particularly in rural areas. However, Lagos is not whining. It is hoping that by 2020, no public schools in the state will have more than 30 students in a class.

Giving further insight, the annual education sector performance report reveals that on average, there are 87 students in junior and 68 students in senior classrooms some 10 years ago, respectively in Lagos schools.

Overcrowding in schools bothers everybody in the country including education policy researchers and teachers; the latter worry about meeting the needs of more students and with fewer resources. This is just as parent and students lament the deplorable classroom conditions they study under.

Having too many students in a classroom can have very visible impacts, one study notes, on schools that lead parents, teachers and communities to believe academic performance is adversely affected but argues that this assumed correlation has not received much attention by academic scholars. Therefore, because of the disruptive nature of overcrowding in the academic life of young students, many have suggested the construction of more classrooms.

Classroom size is an important factor in determining the attainment of academic excellence. As noted earlier, the recommended number of students per classroom according to UNESCO should be one teacher to 30 students. However, statistics available from the Federal Ministry of Education shows that in 2004, there were 782 teachers and 18,296,202 pupils (that is a ratio of about 1:50) in 39,221 primary schools. For public secondary schools – as of 2005 – students’ enrolment was 5,422,611 and 122,477 teachers (that is a ratio of 1:45).

Teaching and learning as well as classroom management have thus become a battleground for teachers. In more cases than one, the teachers often lose this battle because they are predisposed to more stress in handling the students. Teachers note that in large classes, the provision of an opportunity for discussion or for any kind of oral input to the written work is difficult. The chance of students copying and cheating is higher in overcrowded classrooms.

“I think the biggest problem when talking about classroom overcrowding is that things become a blur. Two hundred students are abstract; everyone knows it’s a high number, but it doesn’t mean anything. The problem is that each of those 200 children is someone’s son or daughter; each has his or her own special needs; each brings a host of other issues to the table every day. How can I possibly know them well enough to address all these issues?

“Teaching and learning is a personal business. It is not manufacturing. It’s not even retail. When it works properly, it’s closer to medicine than to any other field. Teachers evaluate students’ learning, check for weaknesses and strengths. And ideally prescribe the proper regimen to achieve optimal educational health. It doesn’t work like that in the overcrowded classroom,” Laura Preble, a teacher, said.

A study conducted by the University of London pointed out that teachers “feel there is a moral imperative operating at the heart of their work – every child has the right to the attention and support which they need. This is difficult to attain under all circumstances and create a tension for the teacher, which increases as class size grows.”

Failure to achieve the ideal of meeting every pupil’s needs produces negative feelings towards the teachers’ works with the university’s study adding, “The size of the class contributes to the severe criticism which some teachers express about their own teaching.

“In a sense, once the class size passes a certain point, the teachers are bound to ‘fail’ because the demands on their time cannot be met,” the report stated.

Against this backdrop, Preble admitted: “Being teachers, we try to make it work, but at what cost? With larger classes, teachers are feeling more and more overwhelmed and burned out and we run the risk of becoming ill or exhausted.

“Overwhelmed teachers cannot meet the needs of their many students without sacrificing something of themselves. Although teachers have always given more than they’re asked to give, there has to be a point where we stop saying yes and start saying ‘no more’.

Two Nigerian scholars, A.O. Akinsolu and J.B. Fadokun shared their thoughts on the challenges of overcrowding in classrooms and how best teachers can handle the situation.

“Shortage of classrooms and teachers in Nigerian schools need to be treated as a national crisis worthy of the attention of both the federal and state governments. This will go a long way in ensuring a national target for school enrolment. A lasting solution is therefore building of additional classrooms and employing more teachers.

“A ratio of one teacher to 35 students is hereby suggested. In the realities of large and poorly resourced classes, teachers should shift from just teaching to doing their best in facilitating learning rather than just supplying information. They should also encourage group work, debate, quiz and so on,” Akinsolu and Fadokun stated.

On what teachers can do regarding the crisis of overcrowding in the classroom, they said: “On coping strategies skills of the teachers, a more positive approach is to establish some formality in class activities right from the beginning of the lesson. This could be in the form of class routines and conventions that will keep the students busy as soon as the lessons starts. Finally, seminars and workshops should be organised for teachers to sharpen their skills of teaching.

United Kingdom : No more new petrol and hybrid cars from 2035
Prime Minister Boris Johnson is seeking to use the announcement to elevate...
461 vues
2

India : Exhausted Migrants Fell Asleep On Tracks. 17Run Over By...
Seventeen migrant workers in a group of 20 were killed after a cargo train...
349 vues
4

No fresh cases in 42 districts in 28 days, clinical trials for...
The Indian Council of Medical Research (ICMR) has received approval to...
298 vues