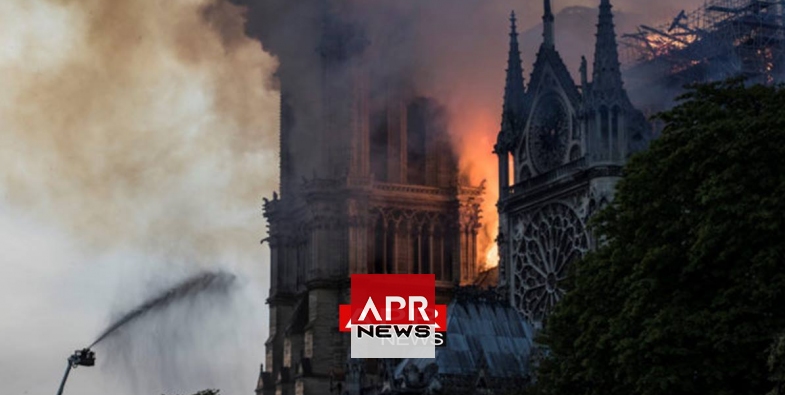 APRNEWS - Shards of stained glass from priceless medieval windows, and a gaping hole above the choir area where the spire crashed down: daylight reveals the extent of damage at Notre-Dame cathedral on Tuesday morning as firefighters put out the last smouldering remains of the fire.

Philippe Marsset, the vicar general of Notre-Dame, was among the first to enter the storied Gothic cathedral whose sculpted arches have been blackened by smoke and pews destroyed.

"It felt like I was looking at a bombing," Marsset said of the church where he was ordained a priest 31 years ago.

"It was hell," he said, describing the moment when the blaze was discovered on the soaring roof shortly after evening mass ended shortly before 7:00 pm (1700 GMT) on Monday.

Church officials raced to remove as many artefacts, paintings and other cultural treasures they could before being evacuated by firefighters as they tried to stop the flames from spreading.

But the blaze kept springing up as globs of molten lead fell from the soaring heights of the church.

"All night long I saw men going past with tears in their eyes. I described it this way: It was total chaos, but we can't let it knock us down," Marsset said.

Yet not all was lost: the crucifix standing over the main altar was one of several objects which escaped destruction.

"I'm devastated, even if I haven't been a Catholic for a long time," 88-year-old Claire told AFP at the scene on Tuesday morning. "I was baptised here."

On the banks of the river Seine, hundreds of Parisians and tourists stopped by on Tuesday morning to take pictures or gaze at the disaster site, many still stunned by the damage.

'Heroic'
"This isn't some little church that was damaged -- it's the symbol of the history of France and of Paris," Marsset said, noting that all distances from Paris are calculated from the square in front of Notre-Dame.

But in the end there was relief that much was able to be saved, with much of stonework, as well as the two massive square bell, towers largely unscathed.

Most of the emblematic rose windows of medieval stained glass were also spared, including the huge round window dominating the church's intricately carved western facade.

"We're all just dumbfounded. It's more than miraculous, it's heroic," Marsset said, calling the firefighters who toiled throughout the night "heroes."

But he appeared lost for words when asked about what would happen now, as Christians worldwide prepared to celebrate Easter next Sunday.

"We had things planned for Wednesday, Thursday, Friday -- We don't yet know where to do these. It's as if our mother has been wounded," he said.

"My bed was right there," he adds, pointing towards the cathedral, where smoke continued to rise into the sky Tuesday morning.

"The church is burning, and the entire world is crying."

No fresh cases in 42 districts in 28 days, clinical trials for...
The Indian Council of Medical Research (ICMR) has received approval to...
627 vues