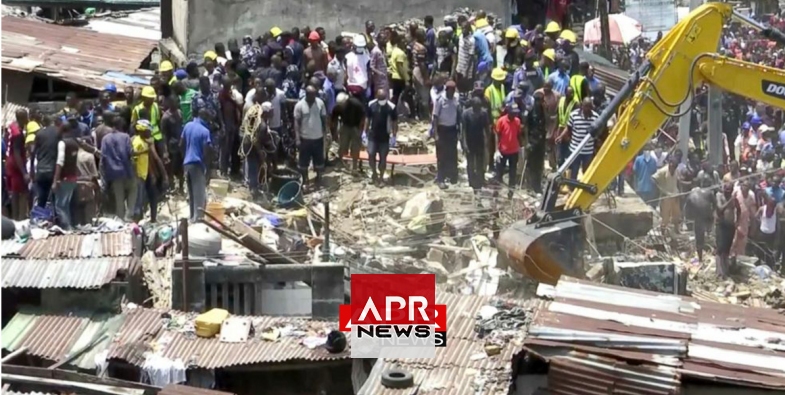 APRNEWS - The state health commissioner in Nigeria’s commercial capital, Lagos, on Friday released official updates on the casualties from the four-storey building that collapsed on Wednesday.

“Twenty corpses were brought to Lagos state mortuaries from the site, 45 survivors were received and were managed by government health facilities,” commissioner Jide Idris said in a statement.

Summary of figures, as of Friday morning is as follows;

Rescue operation called off
While the rescue operation came to an end on Thursday, authorities in Nigeria are yet to give a final death toll and breakdown of casualties after a four-storey building housing a school, homes and shops collapsed on Wednesday.

Tolls given on Wednesday ranged from one to eight dead and between 37 and around 50 recovered alive, but on Thursday a spokesman for the national emergency agency said some of those presumed dead had been revived and the figures were in flux.

Residents say the school alone had around 100 pupils. Rescuers were trying to find a register to work out how many of them may have perished, an emergency official said.

Adebayo Kayende, spokesman for the Lagos state emergency agency, said the Lagos state ministry of health was checking with hospitals and once they had finished counting those dead the details would be made public.

‘‘I charge the Lagos State Government to do all that is needful, so that such tragic developments do not recur,’‘ the president instructed.

Adeshina Tiamiyu, general manager of the Lagos State Emergency Management Agency, said that the agency had recorded one death so far in the disaster, and had rescued nearly 50 people.

“We will be able to give total figures in the morning after we have cleared to the ground floor,” Tiamiyu said.

Angry parents
One bereaved relative, Bose Adeshida, said she had two nieces, aged 11 and 4, who attended the school. The elder child, Amoke, died and her younger sister was being treated for head injuries, Adeshida said.

It was not clear if her dead niece, who had attended the school since the age of 2, was the same person cited by the Lagos emergency agency as having died in the collapse.

Adeshida, whose younger sister was the mother of the children, said she was angry because people had complained about the building for the last 12 years.

She said the site had been marked for demolition but developers repainted it and rented out the space.

“It is expensive in that area. That’s why people stay in a building like that,” she said.

Local resident Yomi Olaniyi, 42, said four buildings had collapsed in the area in the past few years.

Outside the hospital where people taken out of the building were taken for treatment, anxious relatives sobbed and ran towards ambulances as they arrived, hoping their loved ones were inside. Some fell to their knees with tears streaming down their faces.

Some casualties recorded
The governor of Lagos state, Akinwunmi Ambode confirmed that some people were killed when a Nigerian building that housed a school collapsed on Wednesday.

“We have rescued about 25 people, some already dead,” Ambode said, even though he did not say how many died.

Ambode also said the school had been set up illegally and that buildings in the area were undergoing integrity testing.

A Google photograph of the collapsed building from early 2017 shows no sign of a school inside. The fourth storey only had the words “Olulade Villa (Psalm 27)” painted across its balcony.

Rescue updates
Residents said seven children have been rescued from the wreckage of a building that collapsed in Nigeria’s commercial capital of Lagos on Wednesday.

The building housed a school with about 100 pupils, they added.

A Reuters reporter at the scene saw a boy of 10 being pulled from the rubble covered in dust but with no visible injuries. A crowd erupted into cheers as another child was pulled from the wreckage.

A spokesman for the National Emergency Management Agency’s southwest region said casualty figures were not yet available but that many people including children were believed to be trapped.

The Lagos emergency management agency said 10 people had been recovered alive since emergency responders arrived, and others beforehand.

Panic as building collapses
Many people including school children are believed to be trapped inside a building that collapsed on Wednesday.

Ibrahim Farinloye, spokesman for the National Emergency Management Agency’s southwest region, said there was no immediate information on any casualties.

“It is believed that many people including children are currently trapped in the building,” he said.

“The third floor of the building is housing a private school in the area,” said Farinloye, adding that the three-storey building came down at around 10 a.m. local time.

The building was in the Ita-faji area of Lagos island, the original heart of the lagoon city before it expanded onto the mainland.

On social media, pictures and videos of distressed parents reportedly rushing to the school were shared.

At the site, many people were shouting and screaming. A fight almost broke out as anger at the collapse boiled over.

In the crowd’s midst stood ambulances, fire trucks and a fork lift. Workers from the Red Cross and police were on hand.

A history of building tragedies
Nigeria is frequently hit by building collapses, with weak enforcement of regulations and poor construction materials often used. In 2016, more than 100 people were killed when a church came down in southeastern Nigeria.

In Lagos that same year, a five-storey building still under construction collapsed, killing at least 30 people.

A floating school built to withstand storms and floods was also brought down in Lagos in 2016, though nobody was reported injured.