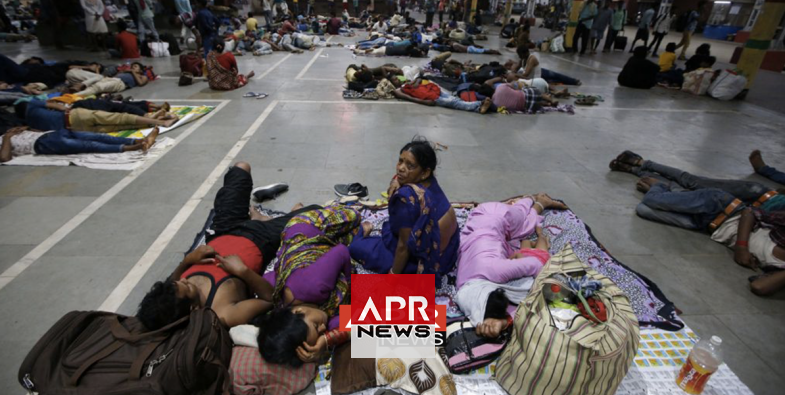 The monster weather system, which made landfall at the eastern holy city of Puri in the morning, is one of the strongest to come in off the Indian Ocean in years, with winds gusting at speeds of up to 200 kilometres (125 miles) per hour.

In recent days authorities in Odisha state, where 10,000 people died in a 1999 cyclone, have evacuated more than a million people as they fret about a possible 1.5-metre (five-foot) storm surge sweeping far inland.

One man died of a heart attack in one of several thousand shelters that have been set up.

"Another person went out in the storm despite our warnings and died because a tree fell on him," Odisha special relief commissioner Bishnupada Sethi told AFP.

"The winds outside right now must be around 200 kph," he said by phone from Odisha state capital Bhubaneswar.

Hundreds of thousands more people in West Bengal state have also been given orders to flee. Local airports have been shut, while train lines and roads were closed.

"It just went dark and then suddenly we could barely see five metres in front of us," said one Puri resident.

"There were the roadside food carts, store signs all flying by in the air," the man told AFP from a hotel where he took shelter. "The wind is deafening."

Another witness said he saw a small car being pushed along a street by the winds and then turned over.

"We have been unable to make contact with our team in Puri for some time now to get the latest update about the situation there," H.R. Biswas, Indian Meteorology Department director in state capital Bhubaneswar, told AFP.

Fani was expected to barrel northeastwards into West Bengal state and towards Bangladesh, on a trajectory that will take it over the homes of 100 million people.

"We are bracing for the worst on Saturday when the cyclone is forecast to batter the city of Kolkata," said Bhattacharya.

"We are monitoring the situation 24x7 and doing all it takes... Be alert, take care and stay safe for the next two days," West Bengal's chief minister Mamata Banerjee tweeted.

Meteorologists have warned of the "total destruction" of thatched houses, the uprooting of power and communication poles, the "flooding of escape routes" and damage to crops in some areas.

Some 3,000 shelters in schools and government buildings were set up to accommodate more than a million people in Odisha, with families including women and babies huddled on the floor.

Ports have been closed but the Indian Navy has sent six warships to the region while India's biggest oil and gas producer ONGC evacuated almost 500 workers from offshore rigs.

Measures were also being taken to protect the 850-year-old Jagannath temple in Puri, a Hindu holy town normally thronging with pilgrims.

AFP correspondents in the resort said it was a near ghost town with trees already torn down and water levels rising even before Fani's awesome arrival.

Electricity and water supplies were already cut for much of the city of 200,000 people. Metal shutters covered store fronts and sand blew up the streets from the nearby beach.

Only a few police vehicles and tractors trying to pull trees or push aside collapsed walls could be seen.

Media reports said hundreds of trees were uprooted at the nearby Chilika Lake just south of Puri in the first violent winds.

"We will just stay for the day until the cyclone has passed. We are not scared but we feel safer here," said Krishna Chandra Sahu, 43, sheltering with seven members of his family in a hotel.

In 2017 Cyclone Ockhi left nearly 250 people dead and more than 600 missing in Tamil Nadu and Kerala.