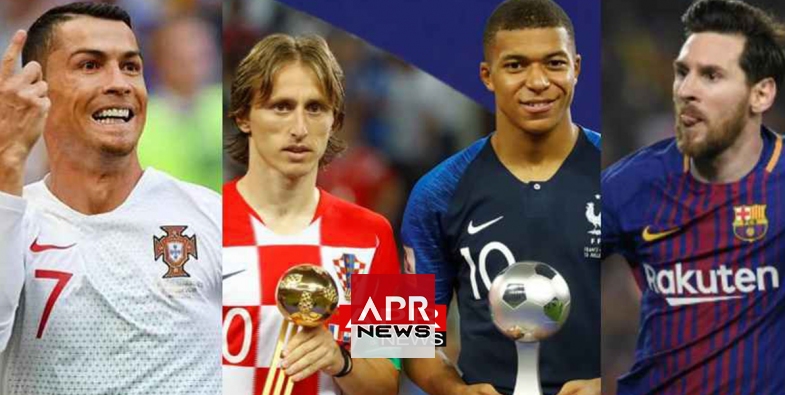 APRNEWS - World Cup finalists, Kylian Mbappe and Luka Modric have been nominated to challenge Cristiano Ronaldo and Lionel Messi’s stranglehold on the World Footballer of the Year title as announced by FIFA yesterday. They are among 10 candidates shortlisted for the title currently held by Ronaldo.

Voting for the nominees, including the Goal of the Year, which features Nigeria’s Ahmed Musa, opened yesterday.

France won the World Cup, beating Modric’s Croatia to the title on July 15 and as reward, Les Blues also have Antoine Griezmann and Raphael Varane in the list. Brazil’s Neymar, who was a huge disappointment at the World Cup, is not on the list.

In a FIFA 13-man panel chose the nominees.

The winners will emerge at the FIFA Best gala night in London on September 24, but three finalists in each of the categories would be announced days before the ceremony.

The choice of winners will be made by a select group of journalists from FIFA’s 211 member countries, including The Guardian’s Christian Okpara, as well as national coaches and captains, and fans voting online.

In a mail signed for FIFA’s Deputy Secretary General, Zvonimir Boban and sent to The Guardian, FIFA said the third edition of “The Best FIFA Football Awards” will recognise football’s top performers of 2018, adding that it would not only be the game’s highest honour for coaches and footballers, but also a celebration in which football fans will play a vital and active part. The awards show will be organised and presented by FIFA.

“Each of the four groups of voters within a jury has the same electoral weight, irrespective of the actual number of voters in such groups (i.e. the votes of the coaches, of the captains, of the specialist journalists and of the fans shall each make up 25 per cent of the total, notwithstanding the number of voters in each group). The results of the individual votes of the jury members shall be published on FIFA.com.

India : Exhausted Migrants Fell Asleep On Tracks. 17Run Over By...
Seventeen migrant workers in a group of 20 were killed after a cargo train...
1427 vues
2