May agrees to extra £44.5 mn for Calais before Macron summit 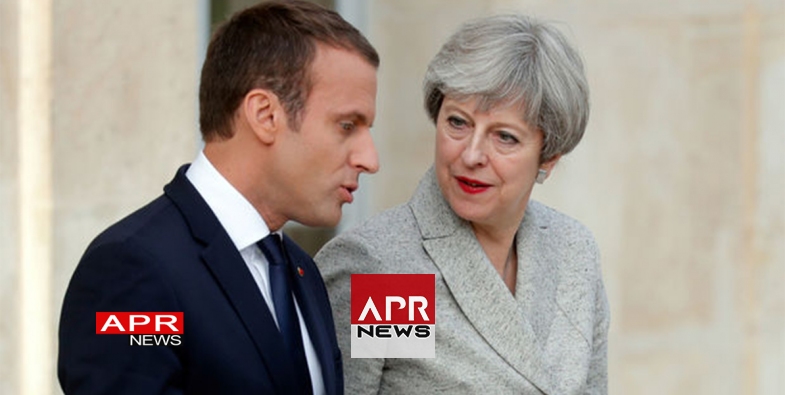 May agrees to extra £44.5 mn for Calais before Macron summit

AFP - Britain said it would pay an extra £44.5 million (50 million euros, $62 million) to boost security around Calais following a demand for more money from President Emmanuel Macron ahead of a key summit on Thursday.

"This is about investing in and enhancing the security of the UK border," a government spokeswoman said.

The funding will go towards fencing, CCTV and detection technology in the northern French port city as well as at other points along the Channel from which migrants regularly attempt to reach British shores by ferry or train.

The money would be on top of more than £100 million already paid by Britain following a border deal between the two countries that has now been renegotiated and is due to be signed on Thursday.

British and French leaders also aim to deepen cooperation in tackling terrorism at the meeting, as Britain tries to strengthen ties before leaving the European Union next year.

Macron, who is on his first official trip across the Channel, will meet May at an army base near the British capital.

In a piece of diplomatic theatre, Macron is expected to confirm that France will agree in principle to loan London the Bayeux Tapestry, the famed 941-year-old embroidery that recounts the Norman conquest of Britain in 1066.

"Today's summit will underline that we remain committed to defending our people and upholding our values as liberal democracies in the face of any threat, whether at home or abroad," May said in a statement ahead of the talks.

"Our friendship has always gone far beyond defence and security and the scope of today's discussions represents its broad and unique nature," she added.

The leaders are expected to focus on the sensitive issue of immigration.

Hundreds of people continue to camp out in the northern French town, hoping to stow away on trucks heading to Britain, a destination seen as an El Dorado by some migrants from Afghanistan and parts of Africa.

The two countries currently abide by the 15-year-old Treaty of Le Touquet, which permits immigration checks within each other's borders.

A new treaty will be signed at Thursday's summit to complement the 2003 deal, according to French officials.

May is also expected to agree to welcome more young refugees stuck in Calais, a government spokesman said.

May and Macron will also announce enhanced police cooperation to control the border.

The deployment of three RAF Chinook helicopters to provide logistic support to French troops tackling jihadis across Africa's Sahel region is part of broader counter-terrorism and military efforts there by the UN, the EU and the African Union.

"Recent terrorist attacks across Europe underline the scale of the cross-border challenge we face in keeping our citizens safe," the UK government spokesman said.

France in turn has agreed to commit troops to the British-led NATO battlegroup in Estonia in 2019.

Officials said it would build on the joint deployment of soldiers to the Baltic country whom the two leaders visited together last year.

At the summit the pair will also discuss their joint crackdown on online extremism "to ensure that the internet cannot be used as a safe space for terrorists and criminals," according to the spokesman.

Britain is also expected to allocate £50 million in additional aid for those affected by epidemics, natural disasters and conflict across Mali, Niger, Chad, North Cameroon, Burkina Faso and Mauritania.

The government hopes the cash will help provide 320,000 people with emergency food and provide protection for 255,000 refugees.

Thursday's gathering at Sandhurst military academy -- the 35th UK-France summit -- comes as Britain seeks to develop stronger bilateral ties with its continental partners ahead of leaving the EU in March 2019.

The issue of Brexit is not scheduled for formal discussion but will likely be touched upon in talks on other topics, the British official said.

Summits in previous years have focussed on defence and security, foreign policy and nuclear energy, but the 2018 agenda was broadened to cover "the full spectrum of the UK-France bilateral relationship including prosperity, innovation, science and education" he added.