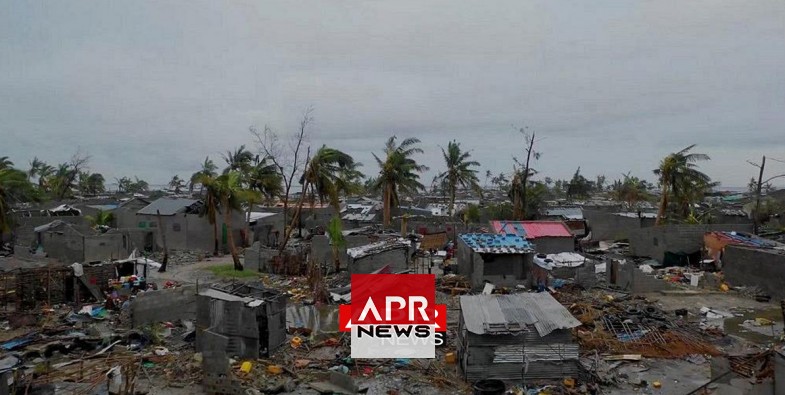 APRNEWS - Mozambican authorities held a mass burial for about forty victims of the tropical cyclone that ravaged the country. The burial took place in the Sussundenga district in the country’s western Manica Province.

The BBC’s reporter in the capital Maputo, said the move was taken because the bodies of the persons were in an advanced state of decomposition.

Cyclone Idai left a trail of death and destruction with flood waters only beginning to recede after two weeks. Mozambique declared three days of mourning last week whiles Zimbabwe mourned over the past week.

Meanwhile, the official death toll crossed the 500 mark on Wednesday. It stood at 447 on Tuesday but is now at 534. The president had last week hinted that it could rise as far as 1,000.

With the new figure, the combined death toll on the three affected countries – Mozambique, Zimbabwe and Malawi stands at 743.

The figures for Mozambique continues to rise as authorities undertake search and rescue operations two weeks after the cyclone hit.

Stranded people who hanged in some cases on tree tops to save their lives were rescued by a multi-pronged team that involved the South African Airforce, Indian Navy and other international relief agencies.

Cyclone Idai made landfall the night of March 14 near the port city of Beira, bringing heavy winds and rains. Two major rivers, the Buzi and the Pungue, burst their banks, submerging entire villages and leaving bodies floating in the water.

Number killed: 534
Number injured: 1,500
Houses damaged or destroyed: 33,600
Crops damaged: 500,000 hectares
Number affected: 1.85 million
First Cholera cases confirmed
After the disaster of Cyclone Idai in Mozambique, five cases of cholera have been officially recorded in the centre of the country.

Aid workers had been fearful of water-borne diseases following the storm that began on March 14. It is in the city of Beira, the city most affected by the cyclone and floods, that cholera cases have been observed.

Cholera is a major concern for the hundreds of thousands of cyclone survivors now living without clean water and sanitation.

The World Health Organization is dispatching almost a million doses of oral cholera vaccine to affected areas from a global stockpile with the shipment expected later this week.

WHO has also warned of a second disaster if diseases like cholera spread in devastated regions.

In response to this, health workers are opening clinics to try to reduce the threat of cholera and other waterborne diseases.

Meanwhile, the death toll in Mozambique from cyclone Idai has climbed to 468 with scores still missing. Last week, Mozambican president Filipe Nyusi had estimated that 1,000 people had been killed by the cyclone.