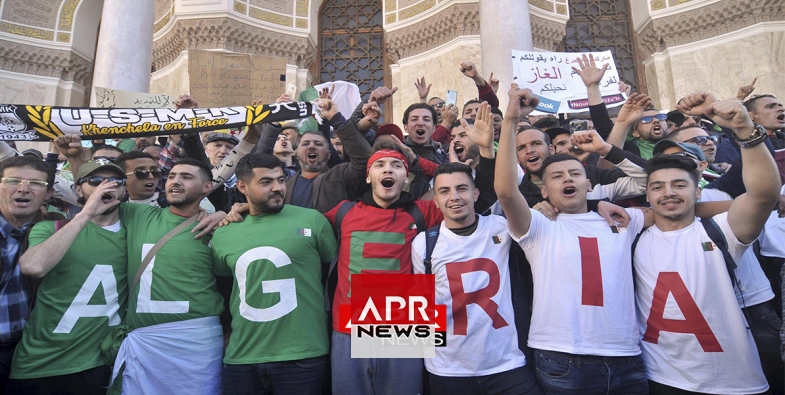 APRNEWS - Thousands of Algerians gathered for new anti-government protests in the capital on Friday despite moves by a succession of veteran loyalists to abandon ailing President Abdelaziz Bouteflika.

Demonstrations were expected to take place across the North African country, where protests broke out more than a month ago when Bouteflika announced his bid for a fifth term.

Turnout was widely seen as a key test of the public mood after a succession of longtime loyalists deserted the president and called for him to step down to make way for a government-led change of leadership.

Activists angrily rejected the moves as a desperate bid by key figures in Bouteflika's entourage to salvage their grip on power and demanded that they too quit.

"The people respond," read the frontpage headline in El Watan, one of the few newspapers in Algeria to have a Friday edition.

From the early hours of Friday hundreds of protesters, many of them young but also including army veterans from the decastating civil war that gripped Algeria in the 1990s packed the square outside the capital's main post office.

"We're fed up with those in power," the demonstrators chanted. "We want a new government".

Some like Amin came from far afield to take part in the protest.

"We're here to issue a final appeal to those in power: 'Take your bags and go'," said the 45-year-old who travelled to the capital from the Mediterranean port of Bejaia, nearly 200 kilometres (125 miles) away.

Pictures posted online showed that some protesters had camped all night outside the main post office, which has become the epicentre of demonstrations against Bouteflika now in their sixth week.

Earlier this month, the 82-year-old president, who uses a wheelchair and has rarely been seen in public since suffering a stroke in 2013, said he would not stand for re-election but also postponed the April vote.

His move angered Algerians who saw it as a ploy by those around Bouteflika to extend his two decades in power and tens of thousands who again took to the streets demanding his immediate ouster.

In the face of the persistent public anger, a succession of veteran Boureflika loyalists deserted the president this week.

On Tuesday, chief of staff General Ahmed Gaid Salah, who was appointed by Bouteflika in 2004, called for him to step down or be declared medically unfit.

The chief of staff on Tuesday invoked Article 102 of the constitution under which a president can be removed if found unfit to rule.

Long a faithful Bouteflika supporter, Gaid Salah said on television it was "imperative" to find a way out of the crisis "which responds to the legitimate demands" of the people in line with the constitution.

Article 102 puts the onus on the president either to resign or be declared unfit to govern by a vote of parliament due to a "serious and durable illness".

Since then other voices have emerged from Bouteflika's own camp seeking his ouster.

On Wednesday, Bouteflika's longtime coalition partner, the National Rally for Democracy (RND) of former prime minister Ahmed Ouyahia, also called for him to step down.

The RND said in a statement signed by its leader, the recently sacked prime minister, on Wednesday that it "recommends the resignation of the president... with the aim of smoothing the period of transition".

A longtime supporter of the veteran president, the unpopular Ouyahia served as Bouteflika's prime minister three times since 2003 before being sacrificed on March 11 in a vain bid to calm the intensifying protests.

Applying Article 102 would constitute "the legal framework capable of overcoming the political crisis facing our country," he said.

And on Thursday the president of Algeria's Business Leaders Forum, Ali Hadad, widely seen as a political tool of Bouteflika who had come under harsh criticism from protesters, resigned his position.

But the idea of Bouteflika's inner cricle retaining their grip on power through a substitute leader drew short shrift from Friday's protesters.

Some chose humour to convey their rejection of the call for a government-led transition under Article 102.

"102 -- that number is out of service," said one placard held up by the crowd outside the main post office and telephone exchange. "Please call the people."

Others raised a banner saying: "We demand the implementation of Article 2019: All of you go."