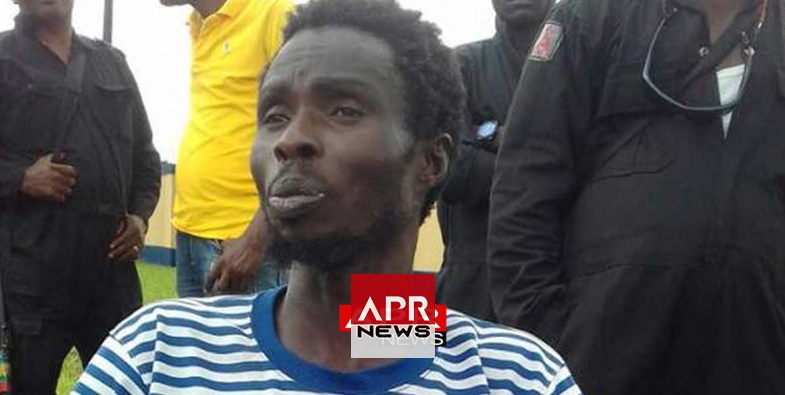 Barely a week after a suspected ritualist was arrested and escaped from police custody in Port Harcourt, operatives of the Rivers State Police Command have arrested a member of a notorious gang, one Roland Peter, who allegedly kidnapped Pastor Samuel Okpara, killed and beheaded him, before using his liver, intestine and other internal organs for pepper soup and plantain porridge.

The suspect was arrested while preparing the meal in his house at Abarikpo in Ahoada East Local Council of the state. The victim, who hailed from Edoha in Ahoada East Local Council, was kidnapped on August 15, 2017, from his house.The Commissioner of Police, Zaki Ahmed, told newsmen yesterday in Port Harcourt, when the suspect and 25 others were paraded at the state police headquarters, Moscow road, that Peter was allegedly in possession of the gang’s riffles.

The police boss disclosed that the gang is led by one Justus, popularly known as High-tension, who also hails from Abarikpo in Ahoada East Local Council. Ahmed said the suspect is helping in police investigation.

The cannibal suspect confessed to have known the victim, Okpara, but denied using his body parts for pepper soup.He said: “Yes I know Pastor Samuel Okpara, but it is not true that I used his body parts for pepper soup. I am a servant of God, I am being paraded because the Lord said my kitchen shall be for everyone he created. So, I usually open my kitchen for everyone.

“One day, my wife told me a guy is in my house and I came and asked him why he was in my house, he said he is hungry and I ordered her to give him food because if you deny the guys what they want, they will rape your wife, kill you and your children. So, to save my wife and family, we gave him food and the police came in the night and arrested me.”

Asked what he used to prepare the meal, he said: “My wife cooked soup with fish not meat and it’s the same food we gave him, I am also a mechanic and the head pastor of God’s Tabernacle Church. So, I can’t lie.”

Giving update on the escaped suspected ritualist that killed an eight-year-old girl and decapitated her, the Commissioner said the evidence tendered during the trial of the ex-police officer who aided the escape of the suspect, JohnBosco Okorooze, revealed that he unilaterally premeditated the release of the suspect before raising alarm of his escape.He, however, declared a N1 million reward for anyone with vital information that can lead to the re-arrest of the suspect.

While assuring that the suspect would be arrested soon, he vowed that the ex-police officer and the suspect would surely face the wrath of the law.
It would be recalled that Ifeanyi Chukwu Maxwell Dike, a 23-year-old 200-level student of the Faculty of Science, University of Port Harcourt, Rivers State, was arrested for allegedly killing an eight-year-old girl named Victory Chikamso. Dike was arrested for the death of little Victory in a case suspected to be ritual murder.

Dike escaped from police custody on Sunday. The suspect had previously been handed over to the police after being caught by a local vigilance group in the Eliozu axis of Port Harcourt. He had reportedly removed the victim’s eyes, vagina, finger and tongue, after defiling and murdering her.

Meanwhile, three suspects (names withheld), who allegedly kidnapped and killed an Adeyemi College of Education (ACE), Ondo, female student for ritual purpose have been arrested by the police, though the Ondo State police command confirmed that only two of the suspects had been arrested, while the third suspect was still at large.

The Guardian learnt that the student, name withheld, had been declared missing by her friends for some days after she reportedly left home and did not return.One of the suspects was nabbed in a robbery operation before investigations allegedly linked him to the kidnap of the missing student. This led to the arrest of the second suspect while the third is still at large.

The state Police Public Relations Officer, Mr. Femi Joseph, confirmed the incident and revealed that the mutilated and decomposing body of the student had been recovered by detectives, who were also interrogating the suspects.

Joseph gave the assurance that the suspects would be charged to court upon completion of investigation, urging parents, guardians and caregivers to always monitor the movement of their wards.“We have arrested two suspects in connection with the killing of the victim for money ritual. The suspects confessed to mutilating the body of the victim for ritual purposes,” he said.