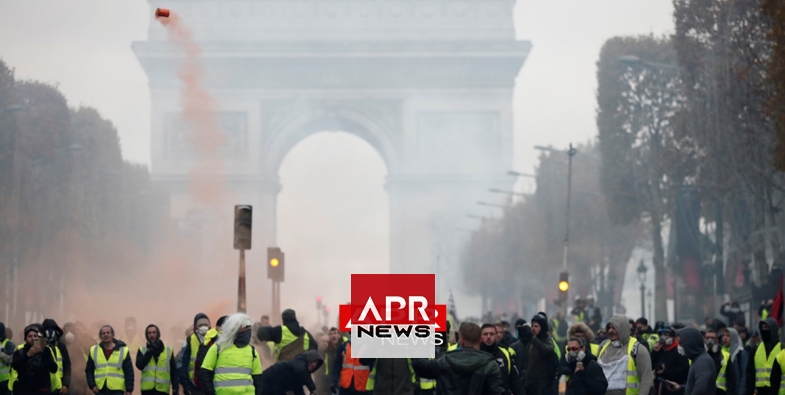 APRNEWS - Here is a timeline of the "yellow vest" movement in France, from the first online rumblings against fuel tax increases to nationwide protests leading to riots, and measures announced Monday by President Emmanuel Macron in a bid to quell the unrest.

So far four people have died and hundreds have been injured during the protests.

On October 18 an accordionist in the Brittany region, Jacline Mouraud, posts a video taken in her living room assailing "Monsieur Macron" and asking him what he's doing with taxpayers' money.

The post quickly goes viral, propelling Mouraud to the fore of the nascent "yellow vest" movement, named for the high-visibility safety vests drivers are required to keep in their cars.

She lists the grievances of drivers in the face of fuel price hikes, and demands of Macron: "When is this hounding of drivers, which you've pursued since your arrival, going to end?"

A petition to bring down the price of fuel is quickly is posted online, and garners tens of thousands of signatures.

Organised via social media, the grassroots protests have few visible leaders, and reject all ties to political parties or unions.

The next day Prime Minister Edouard Philippe says the government will not back down on fuel tax increases set for January, intended to help pay for France's clean-energy initiatives.

After a week which sees "yellow vests" snarl traffic and block motorway tolls up and down the country, a large-scale demonstration takes place in Paris on Saturday, November 24. Thousands of demonstrators clash with police on the Champs-Elysees in Paris.

More than 106,000 demonstrators are recorded across France, including 8,000 in Paris. A week later the number of protesters will be revised upward to 166,000.

On November 27 Macron offers minor concessions, saying he will propose a mechanism to adjust the fuel tax increases in case of rising oil costs, and calls for a three-month national consultation.

Unimpressed, the "yellow vests" call for a new protest on Saturday, December 1, on the Champs-Elysees.

On November 29 Philippe vainly attempts to organise talks with the "yellow vests". He meets one protester. The next day two others accept his invitation for talks, but one walks out after Philippe refuses to have the meeting broadcast on TV.

The third day of large-scale demonstrations takes place on Saturday, December 1, with widespread violence erupting in Paris around the Arc de Triomphe and several upscale neighbourhoods in the west of the city.

The government says some 136,000 people protested across the country.

In the southern city of Marseille an elderly woman dies after having been hit with a tear gas grenade while closing the shutters on her window.

On his return from a G20 summit in Argentina, Macron immediately calls a crisis meeting at the Elysee Palace on December 2.

But "yellow vests" representatives announce they will not attend a meeting with Philippe planned the following day -- later cancelled -- with some saying they have received death threats by other yellow vests contesting their claim to speak for the movement.

Seizing on the momentum from the protests, students start demonstrating over education reforms, disrupting dozens of high schools every day.

On December 4 the government retreats.

The prime minister says planned tax increases on petrol and diesel on January 1 will be suspended for six months, and hikes in regulated electricity and gas prices will be frozen over the winter.

The "yellow vests" reject the moves as insufficient and press ahead with plans for a fourth day of large scale demonstrations on Saturday, December 8.

The government, fearing a new explosion of violence by extremists from both the far left and far right, announces a massive security deployment, with 8,000 police and a dozen armoured vehicles mobilised in Paris.

On December 5 Macron announces that all planned fuel tax hikes for 2019 are to be scrapped, not just suspended.

But he rules out re-imposing a "fortune tax" on high-earners, a core demand of many of the protesters who have accused Macron, a former investment banker, of being "president of the rich".

Farmers say they plan to hold demonstrations the following week, to support their own demands.

On Saturday, December 8, more than 2,000 people are detained nationwide as protesters again burn cars and clash with police in Paris as well as other cities.

Armoured vehicles are deployed for the first time in the capital, which is on virtual lockdown in many areas, with museums and monuments including the Louvre and the Eiffel Tower closed.

Some 320 people are hurt nationwide, and police say some 4,500 people have been detained since the start of the protests on November 17.

On Monday, December 10, following talks with representatives from unions and management, parliamentary and regional leaders, Macron addresses the nation on television.

More than 21 million watch as a sombre-looking president accepts his "share of responsibility" for the crisis and outlines a series of financial measures, including a rise in the minimum wage and tax-free overtime pay.

On Tuesday morning, "yellow vest" protests are still reported up in several parts of the country, while opposition leaders take to the airwaves to criticise the measures as too little, too late.