REUTERS - Burundians stood in long lines on Thursday to vote in a referendum that could let President Pierre Nkurunziza stay in power to 2034, deepening fears of political repression and ethnic conflict in the heart of Africa’s Great Lakes.

Nearly half a million people have fled since Nkurunziza, a 54-year-old former sports teacher and ethnic Hutu guerrilla leader, initially prolonged his decade in charge by running for a disputed third term in 2015.

The landlocked East African country has broadly the same ethnic make-up as neighboring Rwanda, where 800,000 Tutsis and moderate Hutus were slaughtered by Hutu extremists in a 1994 genocide.

The referendum asks voters to say “yes” or “no” to constitutional amendments that would allow Nkurunziza to seek two more seven-year terms beginning in 2020.

Nkurunziza, a fitness and football enthusiast, expressed happiness at the turnout, urging voters to go to the polls early so the result could be declared early.

“We take this opportunity to call on all people of voting age to do their civic duty and present themselves at polling stations as soon as possible, so that this exercise can be concluded,” he told reporters after casting his ballot in his home village of Ngozi. 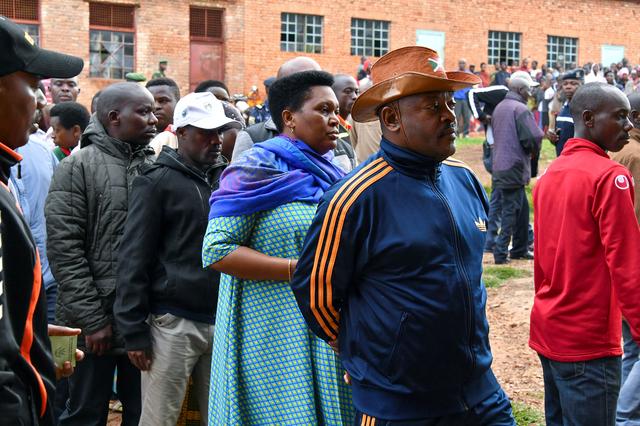 Armoured vehicles and police patrolled neighborhoods of the capital, Bujumbura, on Wednesday evening. Most people questioned by Reuters said they did not understand the constitutional changes and were only voting out of fear.

A 50-year-old man, who did not want to be identified to avoid being targeted for retribution, said turnout was high “not because of good will but because of fear”.

“There has been intimidation - whoever doesn’t go to vote is going against the government’s will,” the man said.

BALLOT CRITICISED
Human rights groups and the opposition Front for Democracy in Burundi criticized the run up to the ballot, which the U.S. State Department earlier this month said could hurt Burundi’s institutions.

The BBC and Voice of America have been banned for violating broadcasting regulations — accusations they deny — leaving Burundi’s 10 million people largely reliant on state-run media controlled by Nkurunziza’s allies for information on the poll.

The government has denied the vote will be anything but free and fair.

“I do not know what ‘yes’ or ‘no’ means since I did not see or read that new constitution,” a 45-year old woman told Reuters after she cast her vote in the capital Bujumbura. She requested anonymity for safety reasons.

Some 430,000 refugees - many opponents of the president -have fled since the 2015 elections. Most have fled to Tanzania and Rwanda.

The country still suffers bouts of political violence — at least 26 people were killed in an attack in a rural province this month.

In the run up to the vote opposition politicians and rights groups have also reported arrests of dissidents, the breaking up of “no” rallies and death threats issued by the Imbonerakure, the youth wing of Nkurunziza’s ruling CNDD-FDD.

Burundi is not the only African country whose leaders have amended the rules to prolong their stay in power.

Rwandan President Paul Kagame secured a change to the constitution that could allow him to remain in office until 2034. Uganda’s long-time ruler, Yoweri Museveni, has removed presidential age-limits.