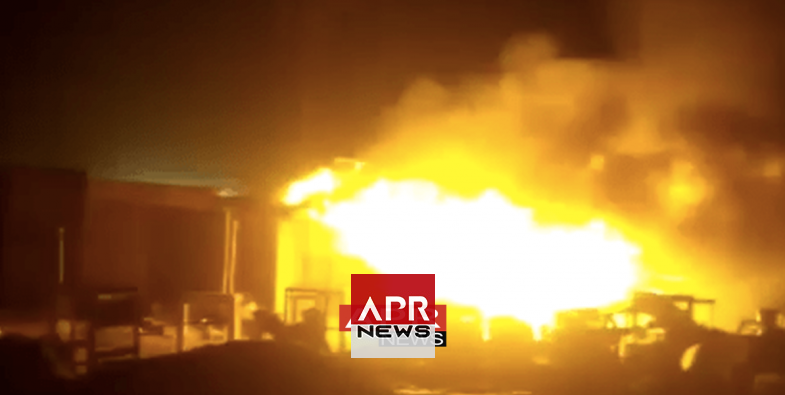 APRNEWS - An early morning inferno on Wednesday consumed no fewer than 13 shops located at the Agbara Market, along the Lagos-Badagry Expressway in Lagos.

The fire which began at about 4.35 a.m. started from one of the container shops opposite the expressway, but its cause has yet to be ascertained.

The 13 shops are all situated in a single line directly opposite the expressway.

A shop owner, Mrs Funmi Olabode, said she was contacted on phone by a neighbour who informed her of the incidence.

She said that she evacuated all her wares before the fire razed her shop, but expressed regrets that she could not rescue the goods of some of her neighbours.

Another shop owner, Mr David Buka, who was also able to rescue his wares, expressed shock at the incidence.

“I don’t even know what to say; I live nearby, and I woke up early because today is supposed to be our market day, only for me to meet this situation,” he said.

Mr Kazeem Sowemimo, who aided in rescuing the goods of some shop owners, said that he works at a Keke Park located in the market and had come out for his day’s work, only to discover the inferno.

He said: “As I come out, I saw fire and saw as everybody was running up and down, so I just began help out.”

Some shop owners who arrived the market later were seen opening their shops and hurriedly carting away their goods before the fire extends to their shops.

There were, however, cries and lamentations by some others, whose shops and goods were razed by the fire.

The team from the Fire Service in Agbara, arrived the Market at about 5.57am and began fire fighting

Meanwhile, amidst the fire incidence, a gospel preacher with a loud speaker seized the opportunity to preach and warn those helping in the rescue of goods, to steer clear of stealing them.

He said: “People of God, give glory to God in all situations; and all those of you helping to park goods of people, don’t take what does not belong to you; if you steal here, the fire of God will consume you.”

NAN reports that among the shops razed down by the fire, include, recharge card shops, Boutiques, Provision shops, Electronics shops among others.

Efforts to reach any personnel on the incidence proved abortive.