Death and despair in last IS Syria bastion 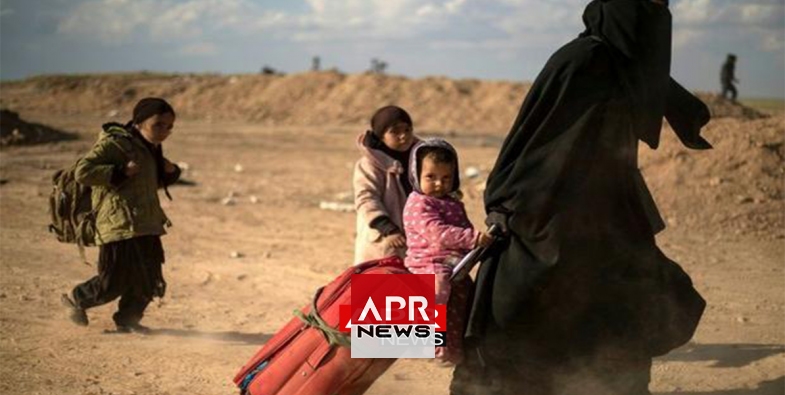 Death and despair in last IS Syria bastion

APRNEWS - Torched tents, a rain of bullets, the thunderous whoosh of warplanes muffling the call to prayer: survivors say life inside the Islamic State group's dying "caliphate" was a bleak catalogue of despair.

The crackle and thud of gunfire and shelling filled the air as plumes of thick black smoke rose over the bombed-out village of Baghouz, the last sliver of territory still under IS control.

"The last days were horrible," said Sana, a 47-year-old Finnish woman among the thousands who fled the bastion on Tuesday.

"Bombing, shooting, burning all the tents... you would wake up and everything was destroyed."

More than 7,000 people, mostly women and children, have fled the shrinking pocket over the past two days, as US-backed forces press ahead with an offensive to crush holdout jihadists.

The operation to smash the last remnant of the "caliphate" that IS leader Abu Bakr al-Baghdadi proclaimed in 2014 resumed Friday after a long humanitarian pause.

Veiled from head to toe, Sana mixed milk powder with water to feed her children.

The mother of four said she came to Syria with her Moroccan husband four years ago for the sake of Islam.

"In the beginning yes, everything was normal," she said, a narrow slit in her veil revealing honey-coloured eyes.

"Without bombings, everything was nice, we were happy," she told AFP.

She has since lost her husband to a car accident and has followed jihadists across Syria's east and northeast, not settling in one place for longer than 16 months.

She said she wished she could reverse her decision to join IS.

Rudimentary tents and a small cluster of battered buildings, nestled in a palm-lined bend of the Euphrates, are all that remains of the IS proto-state.

Its last survivors seek shelter in underground tunnels and inside tents and cars to hide from the shelling.

"We dig tunnels underground, and we cover them with blankets, that's the tents," said Abu Maryam, a 28-year-old Syrian man from the coastal province of Tartus.

"We lived... on top of each other because there were so many people."

He said he lost his wife and two children during shelling on Baghouz only days ago.

"They burned and I lost everything," he said.

"I just want to leave and rest a bit."

Jihadists allowed women, children and the wounded to quit the bombed-out bastion in recent weeks, but it has prevented men of fighting age from fleeing, according to survivors.

But jihadists are now allowing men to leave as death and destruction take hold.

But the Iraqi woman waited until jihadists released her 20-year-old son before escaping, with him and her two daughters.

"Men under 40 who wanted to go out were imprisoned in a guarded tent," she said. "But only two days ago they let them go".

Jihadists themselves are among those who have left.

Some 400 IS fighters were captured on Tuesday night as they attempted to slip out of Baghouz.

The US-backed Syrian Democratic forces said the escape was organised by a network that had planned to smuggle them to remote hideouts.

The last malnourished survivors of the IS proto-state tear into packages of water and bread when they arrive in SDF-held territory.

"It's been more than nine months since we last saw a vegetable," said a 24-year-old Belgian woman who identified herself as Safia.

"Everything was expensive, last month a kilo of rice was over 50 dollars."

She says she grew up in the northern French town of Roubaix.

She married a French jihadist and followed him to Syria, where they lived out the dream of the "caliphate".

"This is the only place where I could live my religion as I wanted," she said.

"I really thought it was only going to get bigger."

Nearby, a French woman sits on the ground beside two crutches, who said she was wounded in the leg by gunfire.

"There was shooting 24 hours a day," she told AFP, declining to give her name.

"Everyone is fired at, everyone falls on the street," she said.

"It was chaos, there is no other word."