‘This could have been a Breonna Taylor:’ Police stormed a Black student’s dorm after a false report 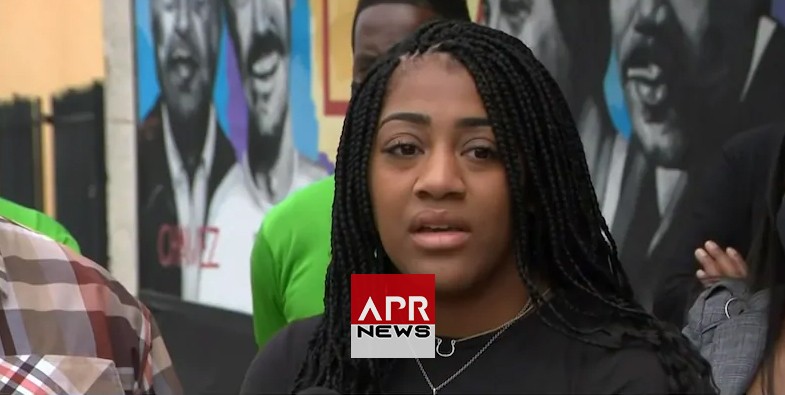 Aprnews - ‘This could have been a Breonna Taylor:’ Police stormed a Black student’s dorm after a false report - News - Usa
Email Facebook Twitter LinkedIn
Tuesday, 29 September 2020

‘This could have been a Breonna Taylor:’ Police stormed a Black student’s dorm after a false report

Christin Evans was suddenly awakened in the early hours of Sept. 14 by the sound of campus police storming into her dorm room at Stephen F. Austin State University with guns drawn and bright lights shining into her eyes.

A resident adviser had called campus police after a group of students, which included Evans’ three White roommates, said that Evans, who is Black, had threatened them, her lawyer, Randall Kallinen, said at a news conference on Monday.

But soon after the 3 a.m. raid, police said the accusation against 17-year-old Evans was made up.

Two weeks later, Evans’ family said they are frustrated that the investigation is still ongoing, and have called for the university to take action against the students who made the false report, which they believe was racially motivated.

“I want justice,” her mother, LaShondra Evans, said at the news conference. “I want them to have consequences. They played with her life.”

In a statement provided to The Washington Post, John Fields Jr., SFA’s executive director of public safety and chief of police, said that the university is investigating a “racially diverse group of students” allegedly involved in the false report.

“The students responsible will be held accountable for their actions at every possible level,” Fields said.

SFA President Scott Gordon said in a statement to The Post that the university is taking the situation seriously and that “judicial processes take time.”

“Each perpetrator will be dealt with appropriately,” Gordon added. “My heart goes out to the young lady who was an innocent victim in this matter. We will do all we can to support her and her family through this heinous ordeal.”

Christin Evans’ family and lawyer are calling the incident an act of “swatting,” which is a dangerous prank that is meant to cause such alarm that police respond aggressively or even with a SWAT team. In recent years, “swatting” calls have led to deadly encounters with police. In March 2019, a 26-year-old man in California was sentenced to 20 years in prison for reporting a false armed hostage situation. Police surrounded the victim’s home and fatally shot him on his porch.

Evans, a freshman from Houston, was recruited to be a cheerleader at the university in Nacogdoches, Tex. “I was looking forward to making friends and having a good time on the cheer team,” she said at the news conference.

But at some point in the early hours of Sept. 14, a group of around 10 female students told a resident adviser that Evans had threatened to stab them with scissors. The adviser called campus police.

After storming Evans’ room, officers reviewed security footage from the dorm that proved Evans was innocent, according to KPRC.

Evans’ parents urged SFA to quickly reprimand the students behind the false report.

“Yes, we’re upset and we want something to be done about it,” her father, Chris Evans, said. “When I sent my daughter off to school, my worse-case scenario was that she should call needing money or an issue with her grades.”

LaShondra Evans said that she is kept up at night thinking about what could have happened to her daughter.

“Kids sleep with their phones in their bed. What if they [saw] her phone flash, or the back of her phone is shiny … and they had reported she had a knife. They could’ve shot her,” the mother said.

“This could have been a Breonna Taylor circumstance,” Kallinen said at the news conference, referring to the 26-year-old Black woman who was fatally shot by Louisville police after they forcibly entered her home with a warrant that didn’t require an announcement.

Christin Evans has now moved into a new dorm and is continuing to take her classes online. Because of covid-19, SFA is offering both in-person and online courses for its nearly 13,000 students.

Evans said she is traumatized by the experience of armed police rushing into her room.

“I feel shaken. I don’t even know how to think,” she said. “I can’t sleep at night because of this. It has made me really paranoid.”