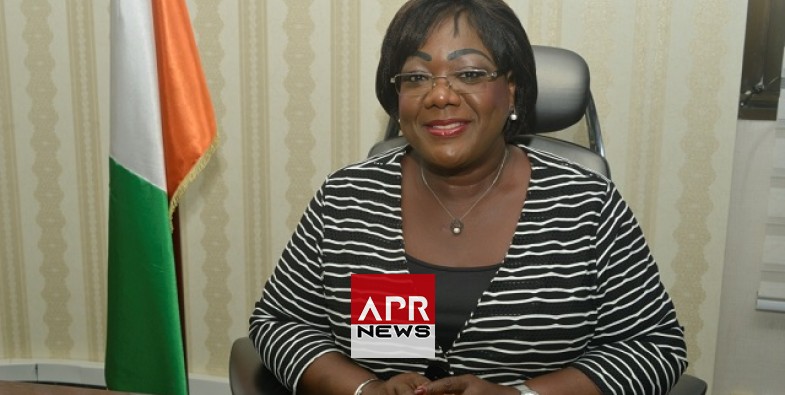 Anne-Désirée Ouloto was Alassane Ouattara’s spokesperson for a long time. Many Ivorians discovered her during the 2010 presidential campaign and the post-election crisis that followed.

Pugnacious, intrepid and an excellent communicator, she works to explain and promote the government programme of her boss. This teacher by profession, currently Minister of Sanitation and Sanitation, is a fine mouthpiece who masterfully controls the art of public speaking. Anne-Désirée Ouloto took on the responsibility of establishing the presidential party in her home town and its surroundings. Originally from Toulepleu, in the west of the Ivory Coast, she is a committed grassroots activist with a taste for both the field and the media. She enjoys her work to her heart’s content. But it was in 1994, when the Rassemblement des Républicains (RDR) was created, that she began to frequent rue Lepic, the party’s headquarters.

She accompanies her husband, a certain Mamadou Ben Soumahoro, an emeritus journalist now deceased and a leading figure of the RDR at the time and with whom she was married for eight years, to the meetings of the said party. She met the late Djeni Kobena there in 1994, before the press conference to create the RDR. He was the linchpin of the RDR and encouraged her, from 1995 onwards, to take a greater interest in politics. Also in 1995, Djeni Kobena gave Anne Ouloto a road map and sent her on a mission for the first time to the west of Côte d’Ivoire. She will travel through sixty-one villages for four months, going door-to-door in order to raise awareness among the population and push them to integrate RDR. During the same period, Colonel Ouloto, her father, is harassed.

The senior officer pays the price for his daughter’s involvement in politics. Unlike his other comrades, he will assert his right to retire without promotion, before returning to the forefront as advisor to General Robert Guéï, who became president of the republic following the coup d’état of 24 December 1999. In spite of the numerous appeals from the new regime, Anne Désirée Ouloto continues to militate for the RDR and swears loyalty to Alassane Ouattara.

Moreover, the first meeting between Anne Ouloto and Alassane Ouattara dates back to 1996. She has just lost her mother. ADO, then Deputy Managing Director of the International Monetary Fund (IMF), gave her a phone call to offer her condolences. It was their first contact. He will participate in the funeral of Anne Ouloto’s mother by donating a large sum of money. Once in Abidjan, Alassane Ouattara, accompanied by his wife Dominique Ouattara, goes to the home of his “uncle” Mamadou Ben Soumahoro and Anne Ouloto whom he affectionately calls “tantinette”.

It is at this moment that everything comes into play: she is struck by the Ouattara couple’s gesture and remembers, as she did yesterday, with gratitude, ADO’s paternal generosity. Dominique Ouattara will adopt her as his “little sister”. In the momentum of this beautiful relationship that is being built, Ben Soumahoro will leave the RDR, except that she will not follow her man in this process. She stays, because according to her own words: “Alassane Ouattara made me. »

Having become President of the Republic, ADO validates her entry into the government and positions her as Minister of Urban Sanitation. It is the birth of “Mother Bulldozer”. With this ministerial post, Anne-Désirée Ouloto has a clear job description: to rid the country of its anarchic constructions. She got the green light from the boss. But when she arrived, she discovered a ministry in debt and a sector that was evolving in the informal sector. Minister Ouloto decides to bring the ministry up to international standards. From then on, the die is cast.

The Minister of Urban Hygiene begins a major awareness campaign in all markets and explains to Ivorians how she intends to manage waste from now on. She is pulling out all the stops. Under the leadership of President Ouattara, and the late Prime Minister, the late Amadou Gon Coulibaly, Anne-Désirée Ouloto is the one who will close in 2018, the Akouedo dump in Abidjan, which she considers obsolete, and decides to create a new dump. This is historic. It deploys bulldozers all over the country. The city of Abidjan is the launching pad for this pharaonic project. The Minister of Urban Sanitation demolishes anything that does not comply with the standards, frees the pipes and authorises the removal of anything that obstructs the public domain.

She does not hesitate to go down to the field to follow up the work of the 6,000 people under her responsibility. It’s a department that she manages like a holding company, using the Ouattara method, her mentor, and being results-oriented at all costs. It is a tug of war between the government representative and the people affected by this operation. But Anne Désirée Ouloto does not weaken and does not back down either. She is determined to accomplish what her hierarchy has asked her to do through a well-defined roadmap. She will give the Ministry of Urban Hygiene back its full meaning and arm it sufficiently to play its role to the full.

However, at the end of 2012, after good and loyal service, the Chief Tribune is appointed Minister of Solidarity, Family, Women and Children. This is another pair of sleeves that will be very short. In January 2016, Anne Désirée Ouloto returned to the Ministry of Sanitation and Urban Hygiene. It is the return in force of “Mother Bulldozer”! A quality that has not gone unnoticed in the eyes of ADO, she knows, as soon as she returns, that she will be able to count on the unfailing support and confidence of the Head of State.

On the basis of this trust, she takes the lead on major issues. Anne Ouloto wishes to put an end to the rubbish crisis from which the autonomous district of Abidjan is suffering. In Abidjan, rubbish is everywhere: the main arteries, around hospitals, schools and neighbourhoods. People complain about it and say they are suffering a lot. She gets personally involved to stop this crisis. It is in this perspective that “Mama Bulldozer”, following a meticulous and meticulous call for tenders, selected the two candidates with the best profiles and service records: Eco Eburnie and Ecoti SA. Eco Eburnie and Ecoti SA are companies responsible for the collection and pre-collection of solid household and similar waste in the Abidjan agglomeration.

In other words, these two operators have been recruited and are working to modernise the collection chain, the transport to their final destination and the management of household solid waste and assimilated, the sweeping and cleaning of gutters. We are witnessing a real revolution in sanitation and hygiene policy in Côte d’Ivoire. The figures speak for themselves. In the northern zone of Abidjan alone, including the communes of Yopougon, Songon, Adjamé and Attécoubé in particular, more than two hundred (200) refuse collection and pre-collection trucks have been deployed.

Households are invited to store their waste in places set up along the roadside. For this purpose, still in the northern Abidjan area, more than one thousand (1000) bins have been installed by Eco Eburnie, seventy-one (71) twenty cubic metre (20 cubic metre) bins and six (6) five cubic metre (5 cubic metre) bins are already in place. As for Ecoti SA, the other operator, it has a fleet of two hundred and fifteen (215) trucks, machines and cars, hundreds of collection containers and covers areas such as Cocody, Plateau, Bingerville, etc.

In addition, the two structures mandated by Minister Anne Ouloto are also committed to raising awareness among Ivorians with a view to changing their behaviour. They help every citizen to adopt sustainable and environmentally friendly practices. Every day, their teams criss-cross the different communes of the Abidjan district to collect waste and clean up the living environment of the population. Thanks to Mrs Ouloto’s vision and the titanic work of Eco Eburnie and Ecoti SA, Ivorians can breathe easier. Abidjan is doing better.

This is another successful gamble for the Minister of Sanitation and Hygiene. Anne Ouloto does not intend to stop there, even if it means making a lot of enemies. We must continue the work because the safety and well-being of Ivorians is at stake, she likes to say. Against all odds, and with the determination and determination that we know she has, she is on the ground and watches over the squalls. She instructs the mayors to continue this work in their respective communes. The quality of the work has made it possible to reduce the areas flooded during the great rainy season. The work of “Maman Bulldozer” seems to give satisfaction to the Ivorian Head of State.