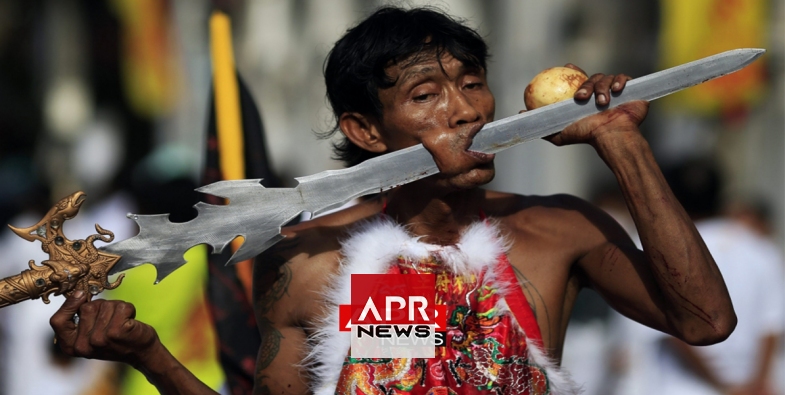 APRNEWS - Every October, the Thai Chinese people of Phuket, Thailand celebrate the Phuket Vegetarian Festival. This festival is a reminder that the Nine Emperor Gods rescued them from a fatal illness that ravaged them in the 19th century.

Although its origin is largely unknown, that it was started by a Chinese opera group in Kathu has been accepted by many. The story is told that one member of the group fell ill with malaria during the Chinese ninth lunar month. Soon, people on the Island started to fall ill. As a result, the Chinese performers adhered to a vegetarian diet while seeking the Nine Emperor Gods forgiveness for not praying in the first nine days. To everyone’s surprise, the ill member recovered speedily.

Since then, the festival has seen people from Asian countries visit Phuket every October for nine days.

During the festival, there is complete abstinence from meat, alcohol, sex, quarrelling and lying.

Contrary to the opinion that this might be painful, the men sometimes have any real injury and feel no sign of pain. This is because they enter a trance before their faces are pierced. As carriers of the piercing, they represent the terrifying gods. The people believe that at their sight, the evil spirits are intimidated and flee.

To complete this purification ritual, the Phuket people start from the main temple before moving out in different processions by walking on hot coals in the 24 temples built by their forefathers.
This purification festival is believed to bring good luck.