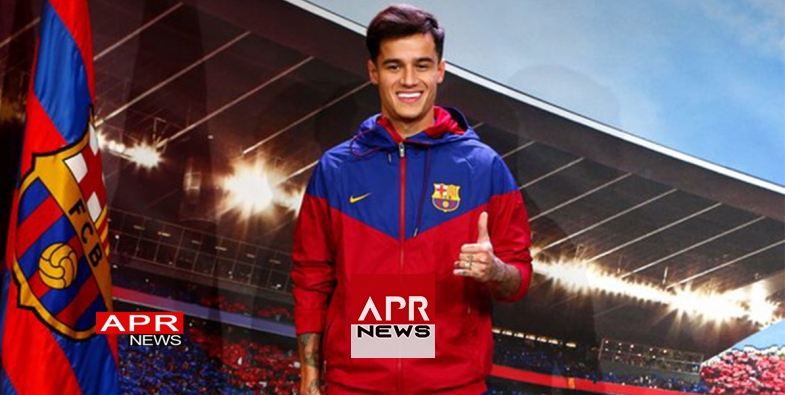 AFP - Philippe Coutinho officially signed with Barcelona on Monday and thanked the club for its patience after the disappointment of the failed negotiations last year.

Liverpool rejected repeated bids by Barcelona in August for Coutinho, but the clubs finally reached an agreement this weekend for a deal worth up to 160 million euros ($192 million), making the Brazilian playmaker one of the most expensive players in soccer history.

"I just want to thank the club for its patience and its effort," Coutinho said. "I'm very happy, this is a dream come true for me and I hope to live up to the expectations."

Coutinho was introduced to the fans at Camp Nou after signing his contract along with club president Josep Bartomeu, but his official debut will be delayed by about three weeks because of a right leg muscle injury confirmed during the medical he underwent after arriving from England.

The 25-year-old Coutinho had been playing regularly in Liverpool but missed the team's weekend match because of the injury.

Coutinho won't be allowed to play for Barcelona in the Champions League the rest of the season because he has already played for Liverpool in the competition this campaign.

"I'm won't be able to play some matches now, but it's a five-year contract, so I'll have plenty of time to help the club in the future," he said. "Sometimes you don't get another opportunity like this, to join Barcelona, so I didn't think twice."

He thanked Liverpool for agreeing to negotiate with the Spanish club.

Coutinho had already shown his desire to join Barcelona in last year's transfer window but Liverpool refused to release him at the time unless the Spanish club paid 200 million euros (then $237 million). Barcelona said it would have been an "irresponsible" financial risk for the club.

"It hasn't been easy, but his desire to come and his patience were key," Bartomeu said. "We need to thank Liverpool as well for agreeing to negotiate, because otherwise this wouldn't have been possible.

"We are thrilled that one of the best players in the world is now with Barcelona."

Coutinho's transfer is the biggest ever for Barcelona, surpassed only by Paris Saint-Germain's acquisition of Neymar and Kylian Mbappe last summer.

Coutinho was Barcelona's main target after Neymar's departure, but the club ended up signing young Frenchman Ousmane Dembele after the failed negotiations with Liverpool for the Brazil international.

"He is a great player, but we have different characteristics," Coutinho said of fellow Brazilian Neymar. "I'm here to try to gain my space in the team."

Coutinho attracted headlines in Brazil as a teenager, being signed by Inter Milan at age 16. He stayed with Brazilian club Vasco da Gama on loan before going to Italy at age 18 in 2010. He also played for Spanish league club Espanyol on loan before eventually joining Liverpool early in 2013.

India : Exhausted Migrants Fell Asleep On Tracks. 17Run Over By...
Seventeen migrant workers in a group of 20 were killed after a cargo train...
1432 vues
2