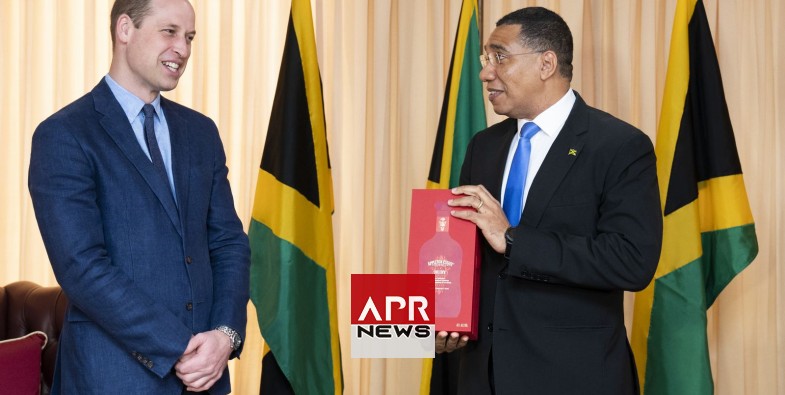 APRNEWS - Prince William has condemned slavery as "abhorrent" and said "it should never have happened" in a speech in Jamaica on Wednesday night.

APRNEWS - Speaking at a dinner hosted by the country's Governor General, the Duke of Cambridge echoed remarks made by his father Prince Charles in November denouncing slavery but stopped short of apologizing for his family's historic role in the slave trade.

"I strongly agree with my father, the Prince of Wales, who said in Barbados last year that the appalling atrocity of slavery forever stains our history," William said.

"I want to express my profound sorrow. Slavery was abhorrent, and it should never have happened," he continued.

"While the pain runs deep, Jamaica continues to forge its future with determination, courage and fortitude. The strength and shared sense of purpose of the Jamaican people, represented in your flag and motto, celebrate an invincible spirit." 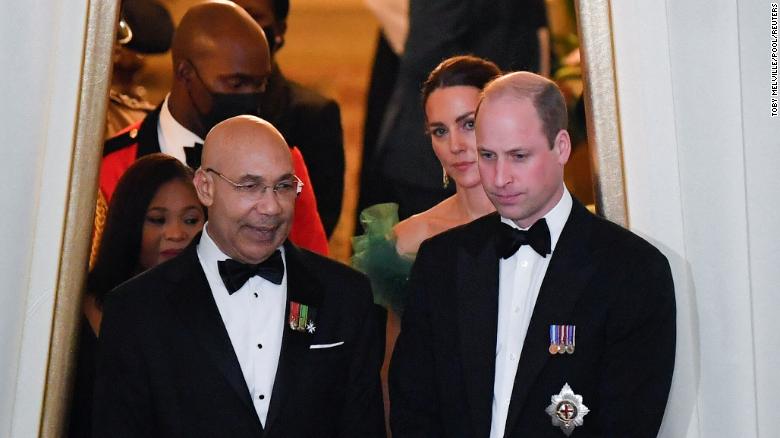 William with Governor General Patrick Allen ahead of his speech at King's House.

Prince William and his wife Kate are on a week-long tour of the Caribbean, visiting Belize, Jamaica and the Bahamas for a series of engagements to celebrate Queen Elizabeth's platinum jubilee year, marking 70 years on the throne.

The duke's remarks came a day after a small group of anti-monarchy protesters gathered in the Jamaican capital of Kingston to demand an apology from Britain.

Some chanted "Apology now, reparations now" while others carried posters and placards reading "Apologise" and "Let's get current. Let's get rid of the rule of the Queen."

A royal engagement on Saturday in Belize was also canceled amid reported opposition from local residents.

Britain and Jamaica's relationship stretches back centuries. The island was seized by the British in 1655 and remained under its rule until it gained independence in 1962 but has stayed a Commonwealth realm with the Queen as head of state. The majority of Jamaicans are of African ancestry and are the descendents of slaves trafficked to the country by European colonists. 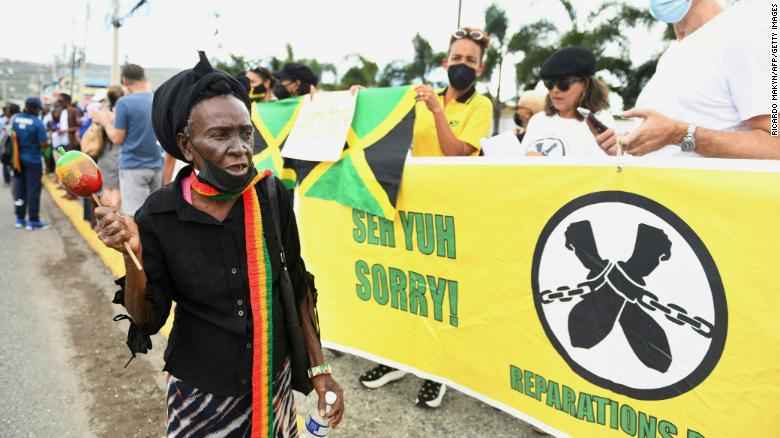 People call for slavery reparations outside the entrance of the British High Commission in Kingston, Jamaica on Tuesday.

Jamaica will mark 60 years of independence from Britain in August this year but there are some in the country who are hoping to seize on the moment to transition to a republic.

On Wednesday, William and Kate met with Jamaican Prime Minister Andrew Holness before visiting a school, a hospital and a project helping at-risk young men, ahead of the dinner hosted by the Governor General.

In what appeared to be a tense meeting, Holness told the couple Jamaica is "moving on" and will attain its "true ambition" to be "independent."

"Jamaica is as you would see a country that is very proud of its history, very proud of what we have achieved and we are moving on, and we intend to attain in short order and fulfil our true ambition as an independent, developed, prosperous country," Holness said.

"There are issues here which are, as you would know, unresolved. But your presence gives an opportunity for those issues to be placed in context, put front and center, and to be addressed as best as we can," the prime minister added.

At the protest on Tuesday, human rights activist Kay Osborne told Reuters: "It is an insult to use for these young people (the Duke and Duchess of Cambridge) to be here to try to persuade us to keep the status quo in place when our goal is to loosen and remove the hands, the gloved hands of the Queen from around our necks so that we can breathe."

Meanwhile, former senator of Jamaica Imani Duncan-Price told the news agency she was participating in the protest "because we began our independence economically weak after having been pillaged by the monarchy; who today live on the benefits of that wealth."

"Sixty years of independence, we have not forgotten and we demand an apology and reparations," an unidentified woman told protesters through a megaphone, according to video from Reuters. 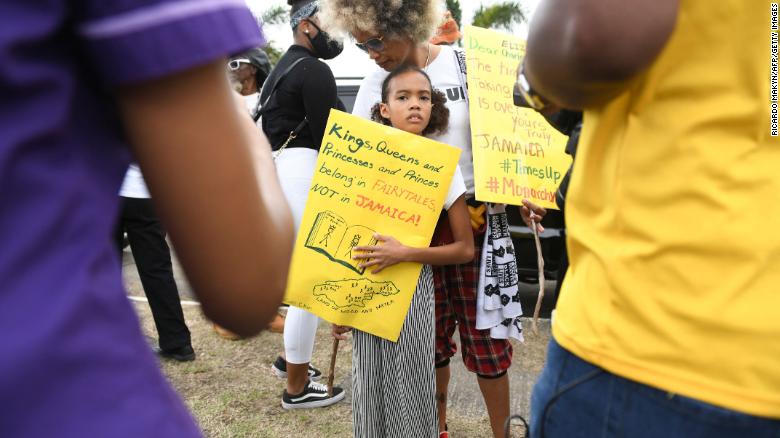 A young girl among the demonstrators on Tuesday.

Debate over whether the country should sever its ties with London has grown in the past year since its regional neighbor Barbados removed Queen Elizabeth II as head of state and replaced her with its first-ever President, Sandra Mason.

On Sunday, two days before the Cambridges' arrival in Jamaica, a coalition of 100 prominent Jamaican individuals and organizations signed an open letter addressed to the couple, urging them to take accountability and "begin a process of reparatory justice."

"We see no reason to celebrate 70 years of the ascension of your grandmother to the British throne because her leadership, and that of her predecessors, have perpetuated the greatest human rights tragedy in the history of humankind," part of the letter read.

"Her ascension to the throne, in February 1952, took place 14 years after the 1938 labour uprisings against inhumane working/living conditions and treatment of workers; painful legacies of plantation slavery, which persist today," it continued.

"During her 70 years on the throne, your grandmother has done nothing to redress and atone for the suffering of our ancestors that took place during her reign and/or during the entire period of British trafficking of Africans, enslavement, indentureship and colonialization." 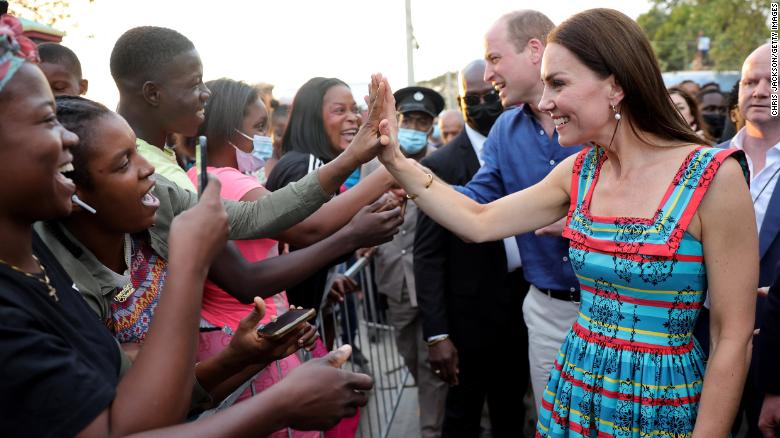 Not all on the island nation were opposed to the royal visit. William and Kate were warmly welcomed by well-wishers during a visit to Trench Town, the birthplace of reggae music.

William's father, Prince Charles, acknowledged the "appalling atrocity of slavery" when he visited Barbados as it transitioned from realm to republic last November, 55 years to the day after Barbados declared independence from Britain.

"From the darkest days of our past, and the appalling atrocity of slavery, which forever stains our history, the people of this island forged their path with extraordinary fortitude. Emancipation, self-government and Independence were your way-points. Freedom, justice and self-determination have been your guides," he said. 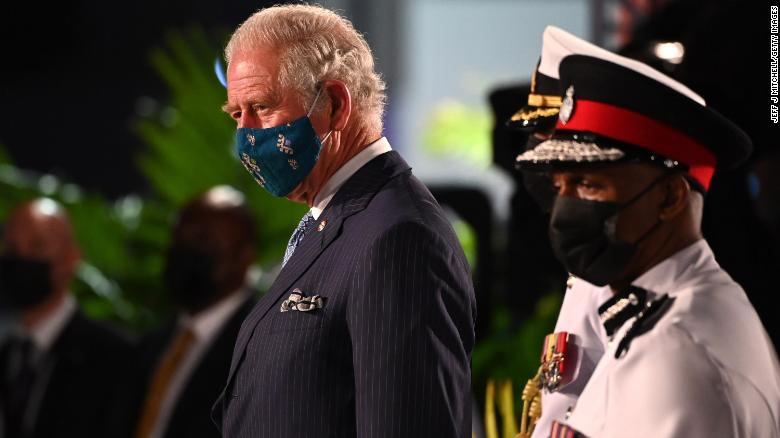 Demonstrations over royal tours are not uncommon and this trip has been no exception.

Things appeared to get off to a rocky start when organizers had to cut an engagement in Belize on Saturday, the first full day of William and Kate's tour.

The pair were supposed to visit the Akte 'il Ha cacao farm in the foothills of the Maya Mountains but the stop was canceled Friday reportedly over opposition from residents in Indian Creek village. An engagement at a similar producer was scheduled later.

Ahead of the trip, Kensington Palace said in a statement that the Duke and Duchess were "very much looking forward" to their tour of the Caribbean and "the opportunity to thank communities across Belize, Jamaica and The Bahamas for the support they have shown Her Majesty throughout her seventy-year reign."