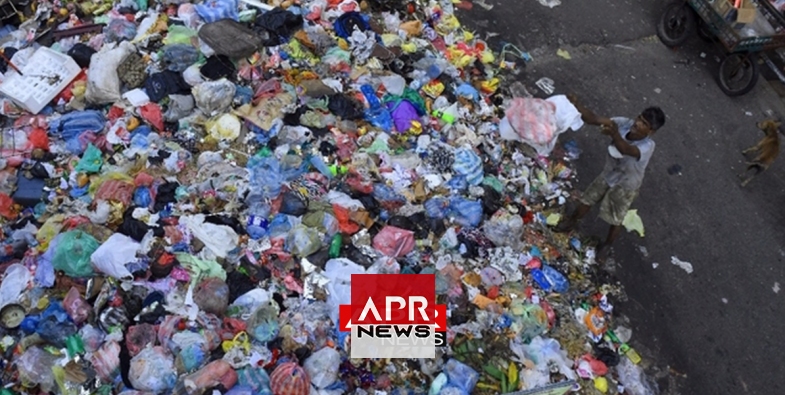 APRNEWS - What defines recent time generation is our desire for life on the Go! The current generation of humans has evolved from analog to digital lifestyle. We crave for mobility and portability. All human discoveries and inventions in recent times have shown the love of earth current residents for smart solutions that provide mobility. From mobile phones to mobile money, mobile food to potable water, from conventional banking to electronic banking, from the giant floppy disk for storage to USB, traditional hardcopy books to e-books and much more.

It is therefore not out of place to call this current evolution the smart-generation. So numerous are the breakthroughs that have been experienced in science, medicine, lifestyle, housing, nutrition et al as a result of the growing interest in building smart cities and communities. Earlier at the inception of the industrialization revolution quite a lot of breakthroughs were recorded, one of which is the discovery of plastics.

In commemoration of this year world environment day I write this piece, not as an academic but as a non-conventional entrepreneur who has spent the past decade of my life daily digging deep into a lecture class held in 2004 at the Chemistry General Lab of the University of Ilorin, Nigeria. As posterity will have it, the lecturer then was Dr. Abdulkareem Sulyman Age now Vice-Chancellor of the prestigious “Better by Far” university who passionately inducted me into the world of polymers.

I later went on to score so high in Polymer Chemistry that year, a course he taught with all simplicity, then something happened to me on which my write-up today is pivotal on. I encountered “PLASTICS”.Need not dwell too long on the evolution of plastics, search engines will avail you quite a handful. I would rather remind you how quickly the world has embraced plastics for the love of portability, durability, and cost-friendliness.

In the world of beverages, Glass reigned supreme until a generation came that felt the fragility of glass and the volume of loss incurred is damning. The same generation felt slowed down by the term “content only” as its inscribed-on glass bottles, who has the time to walk for so long just to return glass bottles to retail stores. Then industrialization came up with a more aesthetic bottle that gave a huge boost to attractive packaging. crispy clear plastic bottles otherwise called, PET bottles!

There was likewise a time in this country when the metropolitan population was satisfied with the chlorine treatment errors of the then water corporation or water authority as obtainable in other municipalities. Tap water runs! And the agrarian communities loved drinking from streams and rivers that cattle pass through. But the Taps dried up and the rural communities got plagued with diverse water-borne diseases.

But then came a generation that seeks to give portability to Water, they found plastics in 3 grades for diverse consumers, again PET bottles came to the rescue. Then came Polythene Films popularly called sachets and also came HDPE Jerry Cans.The consumption of plastics spiked at geometric rates and kept spiking to this moment. Disposal became a huge problem as Plastics were designed to last and indeed they last as it takes over 500 years for plastics to photo-decompose.

It is projected that by the year 2050 there will be more plastics in oceans across the world than fishes. It is also shocking to know the disastrous effect of plastic pollution on humans and animals alike.In the words of Richard Buckminster Fuller – an American Inventor, “Pollution is nothing but the resources we are not harvesting. We allow them to disperse because we have been ignorant of their value”.

In recent times, social-enterprise like Vicfold Recyclers, Wecyclers, Recycle Points and a host of others work tirelessly to beat plastic pollution in Nigeria while likewise creating jobs for the teeming unemployed women and youths in the communities they serve. Some have called for a total ban on plastics, but some likewise support a call for responsible consumption and production as enshrined in United Nations SDG 12.

The ban on plastics won’t make the poorly disposed waste disappear, a more sustainable action is desirous.In the world of plastics, the opportunities are endless, do you know it takes only 60 minutes to return your wastewater sachets to you as shopping bags. It takes about four hours of production optimum time to make your PET bottles into synthetic fibers used in pillow fillings, production of sports shoes and jerseys. It takes about 6 hours to convert 32 pcs 2-Litre PET plastics into a fleece jacket. The cap of your beverage bottles only takes 4 hours to return to you as household buckets and bowls.

The incessant hike in forex has forced a lot of manufacturers in the plastic sector to look inward for their raw materials, and hence the recent recycling drive in Nigeria.

The market size of recycled plastics in Nigeria is in the volume of over 2 billion dollars annually. Would you want to make some money? Then join us beat plastic pollution by recovering plastic waste and preparing them for reintegration into the production line of relevant manufacturers.For a more result-oriented fight at mitigating plastic pollution, we need stiffer regulations in the areas of production, as a percentage of recycled material must be mandatorily used in the production of new plastic products.

Extended Producer responsibility law must be enforced. As packaging waste is another disaster waiting to happen because the packaging of products is core to every production process, and the volume of plastic films used in product packaging is at geometric levels and adequate measures must be taken to forestall the looming disaster.

Importation of virgin plastic resins from countries who are banning the import of their waste must be sanctioned, as Africa isn’t a dumpsite.Municipal Waste management facilities must be established with functional recycling centers in every metropolitan city within Nigeria and other African countries. A new generation of waste-preneurs must rise to the call of the environment at mitigating plastic pollution. Non- easily-recyclable grades of plastics must be discontinued.

Plastic waste must be highly incentivized for increased interest in recycling.Local efforts must be supported as developmental diversity nullifies the sustainability of banning plastics.The call for a closed loop model and a circular economy is more sustainable in our fight to mitigate plastic pollution.Together we can beat plastic pollution while creating Jobs especially for women and the teeming disenfranchised youths in our diverse communities.

I therefore in celebration of this remarkable event in global space invite you to join me and other social-entrepreneurs in the waste recycling space in mitigating plastic pollution and combating the disastrous effects on man and animals alike. Yes, together we can!
.Amusa is an Environmentalist, Social Entrepreneur, Circular Economist, and a LEAP Africa SIP Fellow of 2018. He is also Chief Executive Officer, Vicfold Recyclers- A Recycling Firm based in Ilorin Kwara State Nigeria.