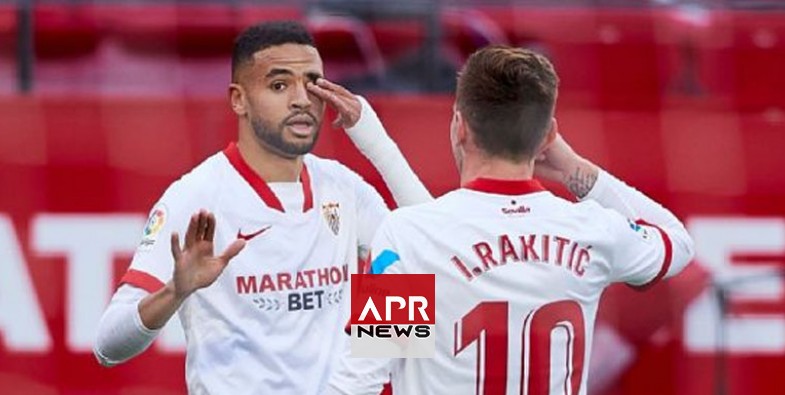 Sevilla's Youssef En-Nesyri served up yet another masterclass this weekend as he further demonstrated why he is Africa's top striker of 2021 so far.

Here's how he and Africa's other top stars fared across Africa this past weekend.

Over in Spain, Morocco's En-Nesyri looks to be hitting form just in time for transfer deadline day, as rumours continue to swirl linking him with a move away from Sevilla.

He now has seven goals in his last four matches -- including two hat-tricks -- having struck all three goals in Sevilla's victory over Cadiz this weekend.

The forward moved beyond Lionel Messi in the La Liga scoring charts with his performance against the minnows, taking his tally for the season to 12 goals in the Spanish top flight, and 16 in all competitions.

By contrast, Messi, top scorer in each of the last four seasons, has 11 goals in 17 matches so far, but he can't match En-Nesyri's return despite playing 308 minutes more than the North African so far this season.

The former Leganes man is certainly hitting his stride just in time for transfer deadline day.

West Ham United are reportedly keen on En-Nesyri, having identified him as a replacement for Ajax new boy Sebastien Haller, but the Moroccan's words after his three-goal showing against Cadiz indicate he isn't interested in a move.

"For now I'm staying at Sevilla, I'm going nowhere," he told journalists, as per TeamTalk. "I want to finish the year here, it's a great club and I want to be here."

You wouldn't have guessed it from watching his performance, but En-Nesyri later claimed after the match that he overcame an eye injury to put Cadiz to the sword.

"I had a problem with my eye and couldn't see but I knew I could do something at the next play and so I had to score with one eye," he continued.

En-Nesyri's star showing takes Sevilla up to fourth on 36 points, one off Barcelona in third, although it remains to be seen whether the Morocco frontman will still be at the club beyond the end of the transfer window.

Lyon forward Tino Kadewere was named as ESPN's African breakout star of 2020 in our end of year awards, and the Zimbabwe frontman opened his account for 2021 this weekend when he scored twice in OL's 5-0 rout of Saint-Etienne in the Loire derby.

It was a dazzling performance by Les Gones, at Kadewere -- the outstanding southern African player in the world game today -- was at the heart of a sensational showing by the title hopefuls.

His double takes him up to nine goals for the season - joint sixth in the top flight so far this term - and fully deserved his goals after a lively and vibrant display.

Kadewere's second goal - coming in the 68th minute - was due in no small part to his excellent interplay with Memphis Depay, and the lethal movement and work rate of Lyon's front three should ensure they remain title contenders over the coming months.

"If we continue like this, taking maximum points, we can contest the title," Kadewere said afterwards, "but when I arrived, my dream was to take Lyon to the Champions League.

"The dream is on track...we'll see what happens."

"Tino, keep making your dreams come true," he wrote on Twitter, to which the Zimbabwean replied to Telefoot: "Getting a tweet from such a big player and someone I admire really gives me motivation."

Also in France, Cameroonian wonderkid Aurelien Tchouameni scored his first Ligue 1 goal when he netted AS Monaco's second in their 3-1 victory over Olympique de Marseille, while Algeria's Youcef Atal scored his first goal of the season as OGC Nice downed Lens 1-0 away to win only their second match since November 1.

In Italy, this weekend marked the return to action of Victor Osimhen following a miserable two months in which injury, illness and indiscipline have worryingly overshadowed his qualities.

His cameo against Verona -- coming on for the final 25 minutes with Napoli 2-1 down in their 3-1 loss -- was his first competitive action since Nigeria's 4-4 draw with Sierra Leone on November 13, and his first Serie A showing in 77 days.

In the intervening period, he has recovered from a shoulder injury sustained on international duty, contracted coronavirus during a quick return to Nigeria, recovered from the illness, and faced sanctions for not wearing a mask while attending an ill-advised party in his homeland.

It's been an utterly unwanted two months out of action for a player who had been struggling to set the Italian top flight alight following his high-profile €70 million arrival from LOSC Lille during the offseason.

Victor Osimhen took to the pitch for Napoli for the first time in nearly three months against Verona, after an injury and then coronavirus sidelined him since November. 4298393

Osimhen had only scored two goals in six Serie A appearances before his injury, and desperately needed to settle in Italy and prove that he could be an asset for Gennaro Gattuso's side.

Instead, there's a sense that he's starting afresh, needing to rediscover his match sharpness and his competitive rhythm, having missed 16 matches during his [partly self-inflicted] absence.

Without him, Napoli's form has wavered, and a poor end to 2020 in particular leaves them nine points off the pace in the title race.

The Nigerian wonderkid must now get his head down, focus on his football, and ensure that he ends the season on a high. Failure to do that, and that hefty transfer fee will begin to weigh heavy upon his young shoulders.

Another Nigerian in Italy -- the towering Simy Nwankwo -- netted in consecutive Serie A games for the first time since October this weekend, when he found the net away at Fiorentina.

It was enough to give struggling Crotone hope on the day, but ultimately insufficient to prevent them falling to a 2-1 defeat.

At least with Simy finding his form again in the top flight, the Sharks -- who are currently bottom of the pile on 12 points -- have real hope of improving their fortunes and beating the drop.

Unusual: The woman with two vaginas.
An Australian woman is all the rage on OnlyFans because of a unique...
3704 vues
2

India : Exhausted Migrants Fell Asleep On Tracks. 17Run Over By...
Seventeen migrant workers in a group of 20 were killed after a cargo train...
1870 vues
3

United Kingdom : No more new petrol and hybrid cars from 2035
Prime Minister Boris Johnson is seeking to use the announcement to elevate...
1637 vues
4

Tears and singing as abducted Nigerian students return to parents
Nearly two months after their abduction by armed gunmen, more than two...
1571 vues